I mentioned the book Jesus and John Wayne by evangelical truth teller Kristin Kobes Du Mez both on the blog, here and here, and here, and in one of my Not Eudora columns recently.

Last night and this morning I closed in on finishing the book. I’m 16 pages away but this morning I had to stop before finishing the second to last chapter. It details all the news stories I’ve heard of cultic Christian Republican ministers who have raped, seduced and betrayed women repeatedly and been outed in the news only to be re-welcomed back into God’s grace by their fellow rapist religious allies in the Trump orbit.

I had to stop reading but I faithfully used my yellow marker, as I had throughout the entire book, to keep track of the betrayal of the Christian message delivered in the Sermon on the Mount. I was too appalled to continue. I went down to chat with my better half about it and she confirmed the entire book was filled with such vile information that she could only read a chapter a day and keep her sanity.

Here’s a page I marked up near the end before that chat. 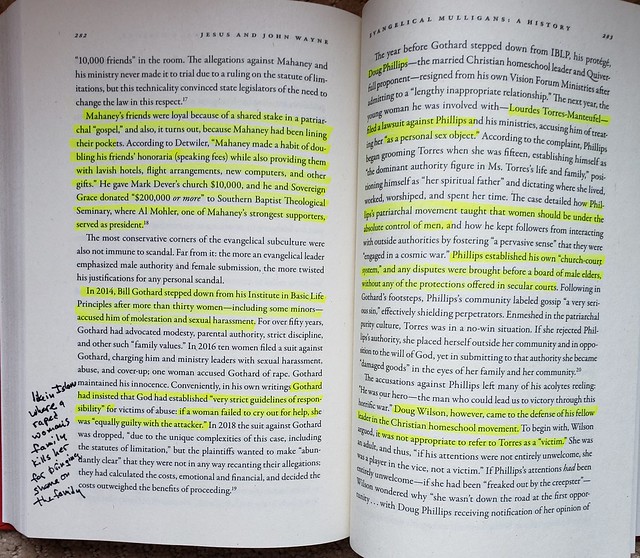 This fellow was a minister of a “conservative” church. I would see him and his wife all the time for years after I stepped away from the party at the Duluth Symphony where my wife also attended regularly.

He was far right like Rush Limbaugh while the radio “comic” denounced and harassed people like me as RINOs to chase us out of the Republican congregation. My first public declaration of independence came when I gave a speech saying if the Party wasn’t careful it would fall into the hands of people like, and I named him, Donald Trump. That was 1992! Its here and you can skip to the 3rd to the last paragraph to find Trump.

A friend of mine told me about this minister. He was a controlling man who ordered his deacons to change the church’s rules so that he alone, the preacher, could make all decision regarding the church. Why not? He was the preacher with God’s word on his lips. They did what he said as faithful, credulous, God fearing men.

After the change and a few departures of the less Godly members this all powerful minister was attracted to a woman in his church and made a serious sexual advance towards her. She rebuffed him. Either angered or fearful of being exposed he took the next Sunday’s sermon to denounce his congregant by name for flagrantly attempting to seduce him.

A short time later the husband of the shamed woman was found after he had hung himself.

These stories from Du Mez are about the contaminate the entire Republican Religious community. Is it any wonder they love and worship Donald Trump?