Where do I begin? An apology for not cleaning up the crumpled wad of paper post. No, I don’t think so. Perhaps I should, as promised, post my letter to the Budgeteer. No, I can do that later. Maybe I should begin with the hot political “debate” between Cravaack and Oberstar that the Trib did a good job forcing Jim Oberstar to attend but lost control of because they didn’t plan for the intense political passions that marched into the DECC arena.

Yes, I’ll start with that. Then I’ll segue into the subject that this post is really concerned with – Duluth School Board Chairman Tim Grover’s heavy-handed abuse of the gavel.

My political junkie days seem to be on the wane. I skipped the Oberstar debate. I’m not interested in either Congressional candidate. I’ve run against Oberstar twice as an independent (because my old party is consumed with giving lip service to stopping abortions). As for Cravaack, an intelligent sounding ex military man, well, he’s sucking up the Tea Party talking points which guarantees that if he’s elected he’ll keep spending the US into debt while letting the debt grow on our children’s backs. He’ll cut taxes alright and keep borrowing from China.

So, a surly crowd of tea partiers and sullen, defensive DFLers heckled their way through the meeting. (According to the Trib the Cravaackians started it)

The Tea Partier’s claims ring hollow to me. They might just as well ask that Roosevelt be removed from the dime since apparently his Social Security and the Medicare which came later are all part of a commie plot to socialize America. Oh, but don’t even think of taking their God Given socialistic social security away! Just kick out the greasers who pay social security taxes so our good, little American children can pick up the tab. That should take care of everything. Oh, and on the issue of communistic Obamacare. Don’t even think about making them pay to cover the cost of care for anyone else who hasn’t, like the aged tea partiers, already gotten on America’s health care dole.

Last night Oberstar, who can be justly criticized for ducking many political debates in the past including one with me back in 1992, faced down the toughest crowd he’s ever appeared before. He was unrepentant and essentially told them they’d have to kill health care reforms over his dead body. I only saw a snippet of this on last night’s news but I was impressed. Politics can be bruising and pols who shrink from political combat aren’t worth a warm bucket of spit. And that’s where I’ll leave the Congressional race to rail against our deservedly maligned School Board.

BULLY FOR THE BOARD!

Last night the board passed a largely empty but right-minded policy to thwart bullying in the schools. Whoopee! Kids will get to watch a video! Maybe the Board should watch it. Just before that Chair Grover shut of the microphone of a speaker who had not yet used up his allotted three minutes and had Duluth police put him in handcuffs and removed from the School Board meeting. The microphone was shut off because soft spoken Loren Martell had the effrontery to read public statements Tim Grover had made during an election which were at variance with his subsequent actions after getting elected. Tim Grover has been embarassed enough already for this, thank you very much. If you dare read back his own public record to him its off to jail with you even if you do it under the three minute speaking limitation.

The Board has apparently made it a routine practice to keep police on hand at school board meetings. They’ve had plain clothes cops there before but now the police show up in uniform. If there have been threats against the board this would justify their presence. There can be no justification for preventing a speaker from using up his alloted time and even less for having him removed by police when he stood his ground waiting for the microphone to be turned back on.

Based on the recent letter I got from the School District’s attorney it is apparent to me that I can expect no quarter from our increasingly thin skinned Duluth School Board. Thank goodness their attorneys can keep milking the District’s lawyer insurance to monitor my blog and bill the District without formal approval by the Board. Loren Martell had better be prepared to dig into his pockets to defend his free speech rights. The District will no doubt be as happy to pay lawyers to dump on the First Amendment as they have been happy to pay for police to intimidate critics.

I might not be enthusiastic about putting Oberstar back in Congress but I sure as hell would vote for him if he ran for the Duluth School Board. He can face his critics. 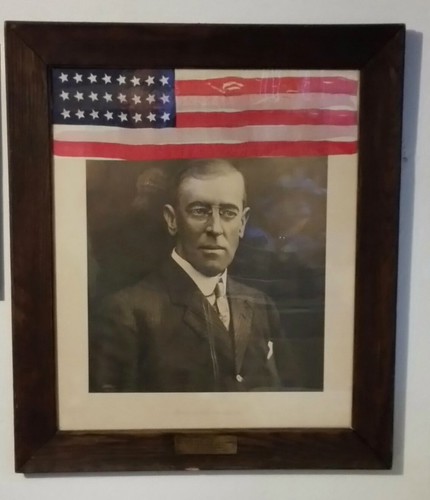 The quote above is from Glenn Beck. See the previous post. This picture shows one corner of my office where the visage of the despised Woodrow hangs sandwiched between my door jamb and a bookcase. Ironically, I don’t much care for Woodrow Wilson myself. I stuck Wilson up on my wall because he figures into my Grandfather’s life story. My Grandfather didn’t have much use for Wilson either.

His presidency was so long ago preceding the birth of my parents that I don’t bear him any personal grudges and I recognize his importance in US history. When this picture was offered to us I snapped it up along with the flag which was tucked into the frame. It came from the Iowa farmhouse attic of my wife’s Grand mother. The picture, I can’t quite tell if its a photograph, was given out by a national farm magazine.

I don’t know what Beck was reading or if he was drunk at the time but his understanding of Wilson is worthy of some Southpark treatment.

When I was a kid in junior high school and long before I was paying much attention to politics my rock ribbed Republican grandfather was telling me about what he characterized as the biggest mistake of his life. In 1916 when my Grandfather was 28 he voted for Wilson’s reelection on Woodrow’s promise to keep America out of the Great War. As my Grandfather was concerned Wilson broke his promise. Needless to say Wilson was the only Democrat my isolationist Grandfather ever voted for his greatest mistake. Subsequently FDR got us into WWII, Truman got us into Korea and Johnson got us into Vietnam. You couldn’t trust Democrats to mind America’s business as they had no respect for George Washington’s warning in his Farwell Address to keep the nation out of entangling alliances and foreign adventures. You can hear an echo from my Grandfather today when you hear Congressman Ron Paul the hero of one third of CPAC.

And yet it was the damn fool war Wilson tricked America into that made my Grandfather’s life a great success. END_OF_DOCUMENT_TOKEN_TO_BE_REPLACED

Ten years ago I bought a book by Rush Limbaugh much to my wife’s annoyance. I got through a couple chapters of his mangled historical analysis before I gave up on the book before it cost me any more brain cells.

Rush hasn’t got a thing on his immatator Glenn Beck. Glenn, who pulled himself out of an alcoholic stupor to make something of himself gave the keynote address at the CPAC convention. They are the conservatives who love Dick Cheney and one-third of whom love Ron Paul.

George Packer who listened to Beck’s address – so we wouldn’t have to – gave a quick synopsis of some of Glenn’s historical analysis. I’m not sure Mr Beck really has given up the drink.

Beck puts on reading glasses, walks over to a blackboard that’s been wheeled onstage, and pretends to know things about American history that the educated people would keep from you. For example, the postwar recession of 1919-20 was worse than the Great Depression, which was only great “because of all the Progressive ideas to cure it.” He writes the word â€œProgressivismâ€ on the blackboard. Progressivism is the main theme of his speech, the “cancer” that’s killing America, that has to be eradicated because it cannot coexist with the Constitution. Progressivism is Marxism and utopian Socialism. Did you know that Communists called themselves Progressives in the nineteen-thirties? To prove it, Beck reads from a 1938 Communist pamphlet that’s he’s just received from a fan, “Progress and Democracy in Rhode Island.” But the worst kind of Progressive was Woodrow Wilson. “I have to tell you, I hate Woodrow Wilson with everything in me” are Beck’s first words when he comes to the microphone. He holds Wilson responsible for the “progressive” income tax and for Hitler, who was created by the Versailles Treaty, which Wilson negotiated. And Wilson gave us Prohibition, which was the beginning of the campaign for health-care reform. Beck spreads his contempt around both parties, he hates T.R., too, whose Bull Moose Party was also called the Progressive Party (take that, McCain). Coolidge, though, was a great President, so great that Harding’s death must have been an act of God. Then came Hoover, another Progressive, who raised taxes and increased spending, which led to the Great Depression, which was not as great as Wilson’s.

You can read more from Mr. Packer and even listen to some of the speech at the New Yorker on line if you are willing to lose some brain cells.