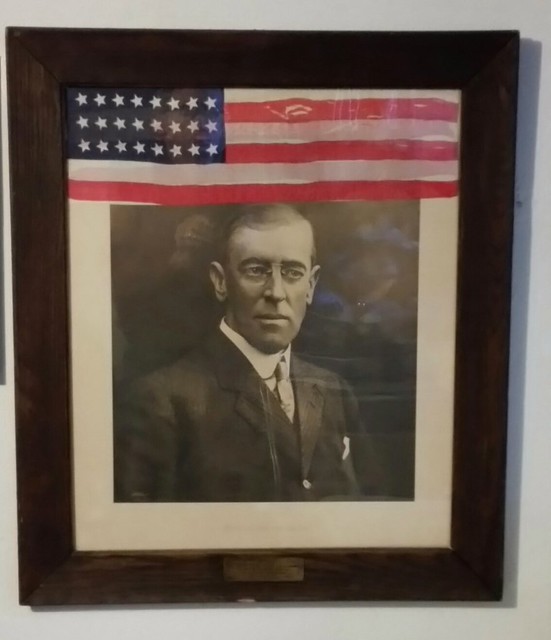 The quote above is from Glenn Beck. See the previous post. This picture shows one corner of my office where the visage of the despised Woodrow hangs sandwiched between my door jamb and a bookcase. Ironically, I don’t much care for Woodrow Wilson myself. I stuck Wilson up on my wall because he figures into my Grandfather’s life story. My Grandfather didn’t have much use for Wilson either.

His presidency was so long ago preceding the birth of my parents that I don’t bear him any personal grudges and I recognize his importance in US history. When this picture was offered to us I snapped it up along with the flag which was tucked into the frame. It came from the Iowa farmhouse attic of my wife’s Grand mother. The picture, I can’t quite tell if its a photograph, was given out by a national farm magazine.

I don’t know what Beck was reading or if he was drunk at the time but his understanding of Wilson is worthy of some Southpark treatment.

When I was a kid in junior high school and long before I was paying much attention to politics my rock ribbed Republican grandfather was telling me about what he characterized as the biggest mistake of his life. In 1916 when my Grandfather was 28 he voted for Wilson’s reelection on Woodrow’s promise to keep America out of the Great War. As my Grandfather was concerned Wilson broke his promise. Needless to say Wilson was the only Democrat my isolationist Grandfather ever voted for his greatest mistake. Subsequently FDR got us into WWII, Truman got us into Korea and Johnson got us into Vietnam. You couldn’t trust Democrats to mind America’s business as they had no respect for George Washington’s warning in his Farwell Address to keep the nation out of entangling alliances and foreign adventures. You can hear an echo from my Grandfather today when you hear Congressman Ron Paul the hero of one third of CPAC.

And yet it was the damn fool war Wilson tricked America into that made my Grandfather’s life a great success.

A photograph of my Grandfather shaking President John Kennedy’s hand in the Rose Garden stares back at Wilson. About the same time as I was getting instruction from my Grandfather about the duplicity of Democrats my family was urging him to accept the invitation of JFK to join all other Medal of Honor winners in Washington DC.

My Grandfather who was a 30 year old school principal and unlikely to be drafted volunteered to fight in the war he so strongly disproved of. I’ve had fun writing about him and his war experiences on my badly neglected website www.snowbizz.com.

But this post is about Glenn Beck and the poison he is spreading and the eagerness of some people to swallow it.

I’ve read a couple books about Wilson too. If you’ve got a public library with a collection of the PBS series American Experience they had a good 90 minute program on Woody.

Among the reasons I don’t much care for him is his haughty academic attitude. He would have been a fine model for Al Gore. This, however, is a pretty modest failing. He was also a pretty lofty idealist as witnessed by his impractical goal of putting an end to war for all time. A far more nasty quality was his unembarrassed racism. One of the men he defeated in 1912 Teddy Roosevelt had raised the ire of the deep south by inviting a “Negroe” to dinner at the White House. the only blacks in the White House during Wilson’s term were the black servants.

As for Wilson’s presidency in many ways he extended Teddy Roosevelt’s policies reigning in the worst excesses of big business. This is apparently what Glenn Beck finds so offensive. Regulation is evil and robs corporations of their constitutional rights. I’m sure Glenn just hates judicial activism where the court takes on the role of amending the Constitution. Perhaps he is unaware that during the rapacious corporate Era called the Gilded Age the Supreme Court ruled that corporations were to all intents and purposes every bit as deserving to the Constitutions protection as real life American citizens.

I’d just love to hear Mr. Beck defend the generous bonuses awarded by the banks with all the money given to them by the American Public to keep them solvent after their ill considered loans nearly brought the world economy to the abyss. This, however, is one ringing defense of corporate America that I don’t expect this champion of the Tea Party movement to make.