President Trump flew in to West Palm Beach a little after Claudia and I flew in for the weekend memorial service for her father. Politico says Mar-a-Lago is Mr. Trump’s safe place.

I should hope so. Ever since his arrival F-16 vipers have been circling the skies keeping watch. His get-away palace is just under a half hour drive from where we are but the air force can travel that distance in seconds.

Putin’s poisioners have probably attached a GPS tracking device on Nancy Pelosi’s person to make sure she can’t crash his holiday celebrations. 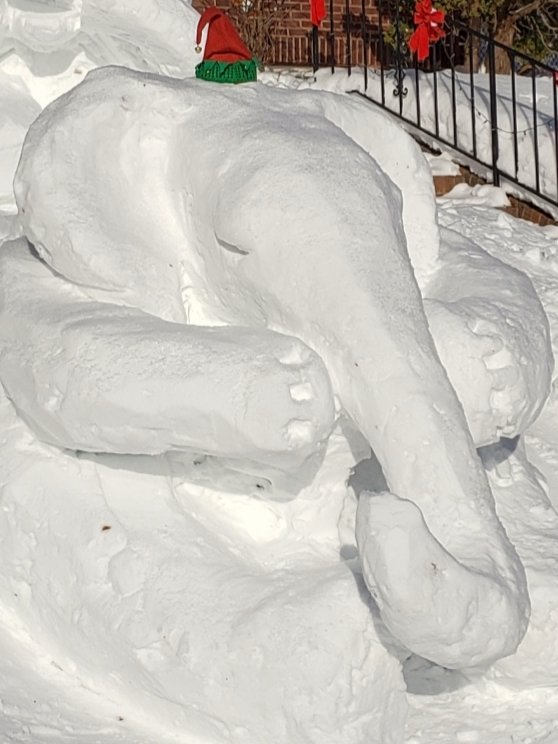 If you couldn’t tell it by looking at my friend here, he’s pinching his nose tight. He’s not alone on my front yard. His older siblings are each keeping evil at bay in their own ways. Ostriches are far more efficient. They accomplish all this unwelcome stimulation by sticking their heads in the sand. This is the new Trumplican Party.

It is impeachment season but the Democrats are permitted to act on their consciences when it comes time to vote. This wasn’t good enough for one New Jersey Democrat. Representative Van Drew is switching parties even though Nancy Pelosi isn’t enforcing a pro-impeachment vote. The Congressman may not end up benefiting from his party switching. First off six of his staff members quit. Next, the GOP has made it known that they may not want him as their Congressman. Several Republicans have been circling his district planning to run against him.

As for the GOP side of the House there was not so much as a lone wolf baying at the President’s duplicitous ways. That’s a far cry from the ferocity with which Republicans took after Bill Clinton who posed no threat to our nation’s security….just to pretty young women with crushes on Bubba.

There has never been a time in our nation’s history until now that one President held the genitals of every member of his party in Congress in his hands or rather in the hands of the voters trained by the Republican party to rid themselves of independent thinkers in primaries. Today’s march-in-step Republican philosophy comes straight from the mouth of Donald Trump. It is the “group think” that Orwell wrote about although there seems to be little thinking involved just vigorous head bobbing.

Now its all fingers in ears, eyes closed and shouts of “LA LA LA LA LA LA LA I can’t hear you!” And, as you can plainly see from the convention being held in my front yard, even the stink of the Grand Old Party’s corpse has been banished.

As is usually the case when I hold back my blog posts the process works rather like a fast car on a heavily traveled interstate breaking to a sudden stop. Dozens of other cars pile into its rear end. And so, my preoccupation with building one more snow sculpture has left a cascade of posts crash into my backside.

I did stop long enough to write a piece for the Reader My Reverie from a week ago. But even as I wrote it the snow storm removed other distractions. No Duluth Tribs showed up on my front door due to the unshoveled snow. On Sunday I got a huge passel of four which I have yet to look at. At some point a story was written in the Trib about a fellow wanting Duluthians to come to Leif Erickson Park to build snow sculptures. I only found out about the story at church yesterday when a fellow congregant mentioned that my name showed up in it. Apparently the organizer was hoping I’d show up and build something. News to me.

I probably spent twenty hours after the 8th snowiest blizzard moving snow from my backyard to my front yard. The first day of doing this I ended the day feeling light headed and dizzy whenever I bent my head. I found myself stumbling. Having just stopped at accute care a few days earlier for what turned out to be not much I was hesitant to do anything about this. The condition persisted for a week although when I went out to continue my sculpting it went away as though banished by my preoccupation.

A little fellow in a school bus yelled out a window as he passed for me to “Make Trump.” I called back that I had already made him a couple years earlier. In fact, I’ve made Trump twice and a third sculpture, my Grinch, was a barely veiled reference to him. Only Bill Clinton has commanded two sculptures of mine. The first made the national news. The second was barely noticed and when I put a cardboard cheese head on him in honor of the Packers winning the Superbowl no one knew who he was. I don’t like spending hours crafting sculptures of just anyone. But Trump is a man who doesn’t not care if making America Great again means undermining the moral underpinnings the founders breathed into it. I’ve made an exception to him.

But not this year. I imagined a sculpture more about the political party, mine to be exact, that brought Donald Trump’s Presidency into being. I piled up the snow with one sculpture in mind and then changed my mind. I wanted something more like my Grinch that kids would get a kick out of and not reek so much of the politics that are roiling and perhaps imperiling America.

So, after changing my plans I had to figure out how to move snow again with the temperatures dropped too low for sticky snow. Fortunately, I’ve had thirty years to perfect my snow “cooking.” As the cold crept in a couple days ago I poured massive amounts of water on it to sit for the night and diffuse throughout to make it uniform sticky. This also required covering it with fresh unwatered snow to insulate it so it wouldn’t freeze. This process took the better part of Saturday afternoon. Early Sunday I dashed out before church to check to see if I’d managed it and found I had. One of my choir mates saw me on the way to church and rolled down his window to give me grief. He didn’t want to be left alone in the bass section. I still not think he believes my protestations that I was only out doing snow reconnaissance.

So, here is the visual spoiler. I took an evening to build a clay model while watching two episodes of the lastest season of the Crown. Its the best so far by the way. I’ll show you half of the sculpture for now if you don’t mind the spoiler. I’m only doing it because it appears I’ll be able to manage it after today’s addition of even more snow and some looming arctic temps. I may not hurry to complete it: Don’t look if you want to be surprised but I don’t mind showing it because two little girls walked up and guessed what the principals in my sculpture would be: END_OF_DOCUMENT_TOKEN_TO_BE_REPLACED 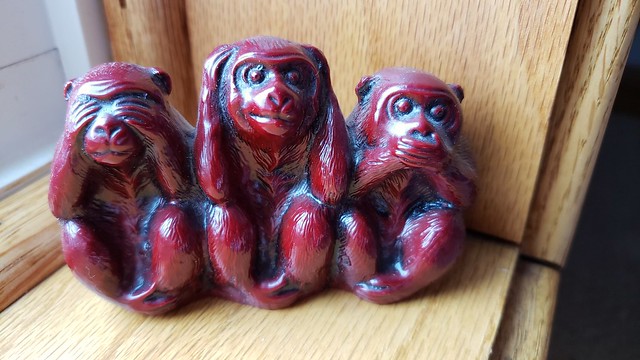 Sitting between my Governor Ventura and Garrison Keillor Bobble heads is this perfect metaphor for today’s Republican Party.

And this story in the “Fake” New York Times about the great truth teller, Alex Jones, is so enlighting that no monkey with six hands will ever acknowledge it:

I worked for Alex Jones. I regret it.

My latest column for the Duluth Reader. Charcoal sketch of Daniel Marsh Welty by his wife, Georganne, circa 1960

This best argument the Republicans on the Judicary Committee could muster against continuing the Impeachment proceedings against Donald Trump Nine minutes long followed by my thoughts:

The first three law professors to speak made strong arguments to proceed with a House indictment of the President. The lone GOP witness, Johnathan Turley, managed to make me second guess the Impeachment because I agreed with his assessment that it is divisive. Then, I checked his testimony in the Clinton impeachment which was alluded to. Did he also oppose that impeachment for being divisive? Nope! He didn’t. In the Clinton hearings he made the same arguments as the three pro-Trump impeachment professors did today. If ever there was a scholar who put himself in the cross hairs of an hypocrisy assault it is Professor Turley. He tried to sound impartial by explaining that he didn’t vote for Trump.

Well, I wonder if he bothered to explain in the Clinton impeachment who he voted for. However he voted he jumped on Bill (I DIDN’T SLEEP WITH THAT WOMAN) Clinton. Had Bill made the claim only in public he’d have gotten away with it just like he got away with saying that he “didn’t inhale.” After all he didn’t “sleep” with Monica. He just let her spill some of his semen on her blue dress. But Bill was caught lying about Monica to a grand jury about his having been intimate with her. Donald Trump’s chief claim to innocence is then that he has never lied to a grand jury. The President lies like a rug every day tweet by tweet…..BUT NOT BEFORE A GRAND JURY. Except that maybe he did. He infamously was excused from testifying because he attorneys aren’t dumb. They know Donald Trump can’t open his mouth without lying no matter if the world is listening with jaws falling to the floor. So he was allowed to have heavily edited (by his lawyers) written testimony submitted in the Mueller probe. Who gets that kind of treatment? Donald Trump does….I guess on the same theory that no one can prosecute a President for committing crimes like the infamous fifth avenue shooting he bragged he could get away with. But there are hints that just like Bill Clinton the President lied to a Grand Jury even in his heavily edited testimony. That would be perjury….the same “high crime and misdemeanor” that Terley thought should cost Clinton the presidency.

Terley championed the book Profiles in Courage in his testimony. As an eighth grader I read, and was deeply moved by JFK’s book. I was proud of my state’s Republican Senator Ross for not voting to Impeach Andrew Johnson. This was Terley’s chief defense – the cheapening of Impeachment. Except that it ignores the threats outlined by his three predecessors. What happens if America recoils at Donald Trump’s massive abuse of power? Will our Congress ever have the courage to defend the Constitution’s deliberate separation of powers in the future? One twitter critic of Terley answered the professor’s question about whether a future Democratic President might be impeached because of a mob-like public fury. The critic’s answered the same way I would have. If a Democratic president tries to subvert our democracy and our elections he should be impeached forthwith.

I’m not worried about the Republican Senators craven support of a President they loathe and fear. Let them live with footnotes in their biographies explaining that they were exactly what America’s voters have come to expect from our elected leaders – gutless wonders.

…it was to humble the arrogance of today’s golden calf worshipers in the evangelical church.

This is one of many stray thoughts while shoveling out of “snowmegeddon” the closest to hell I ever expect to be after four years of Donald Trump proving that Americans are as prone to moneychanging at the Temple as any other people besotted with Satan’s snake oil. 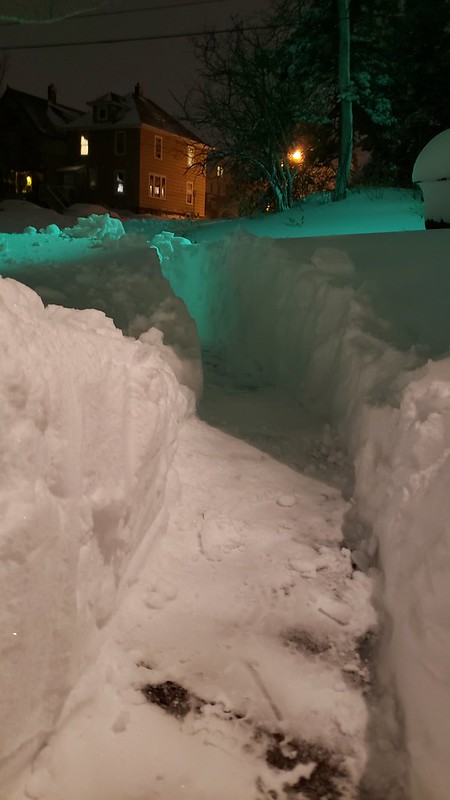 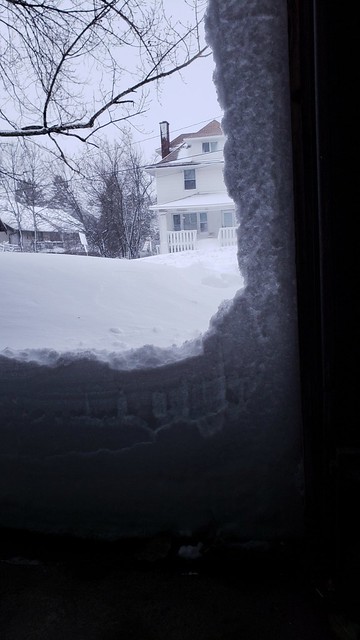 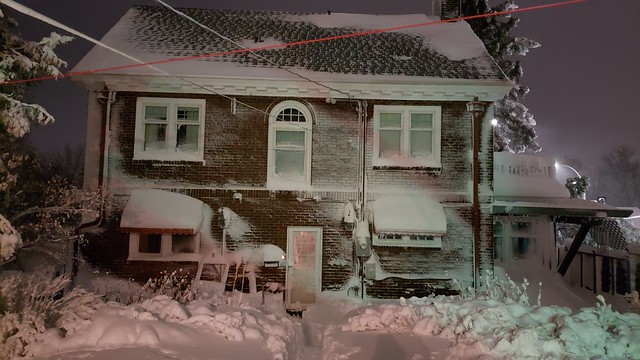