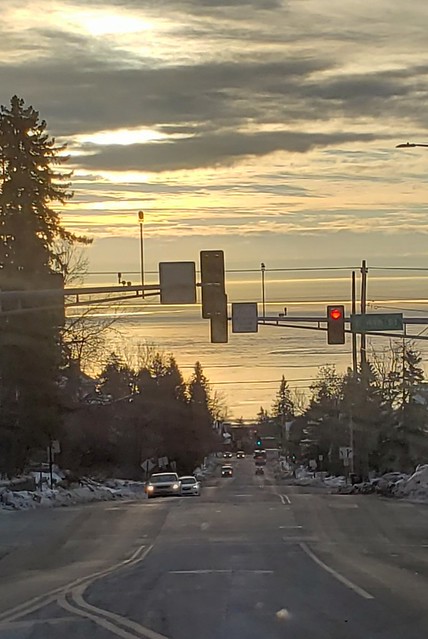 A view from my car just before turning into my driveway this morning after dropping my grandsons off at school. This is first day Lake Superior has iced over this Winter after a recent blast of cold.

Two nights ago I reverted to my sleepless self for four wakeful hours for the first time in four nights. I even enjoyed solving the worlds problems for a change despite my annoyance that I was failing in my efforts to get eight hours sleep. This morning I woke up after six solid hours of slumber. As this is a Harry’s Diary entry I explain this minutia in case some future me is interested in my state of mind during this national crisis over our Mafia President. I explained a new serenity in my second to last Not Eudora column about the New Year’s Baby losing his cheeto-colored head.

And today’s news indicated to me that I’ve been right all along that even Trump’s supporters are beginning to see through him. People are not completely stupid and oblivious to the obvious even when it annoys them.

Two nights ago I got one of the best compliments in ages from a fellow who has gotten a mention or two in this blog several years ago. It was during one of my previous run ins with the law. As I passed out cookies for my grandson’s recent birthday he told me he was very glad that Not Eudora was back. I was floored. I know. This is a little opaque. Too bad for you dear loyal readers but it made my day.

Making my day is a lovely thing. I am running out of organizing in the rest of my life which leaves me with little to organize but some month old piles of documents on my office floor. I left them where they were when I decided, eccentrically, to organized my stamp collections a quarter century after leaving them unattended. I also have a jigsaw puzzle I am finishing alone seven or eight weeks after setting it out for the holidays. Its three quarters done. I mostly neglected it because I’ve been attending to more pressing concerns but, doggone it, as long as I keep putting off writing the third and fourth chapters of a book I’ve been teasing out of myself I’ll be able to finish it and get it out of my system. Heck, I’ve done two snow sculptures since New Years. One of them earned a compliment yesterday that I also enjoyed.

In the evening I went to our church’s every other Wednesday family night. Our pasture had called the Coast Guard and offered to let furloughed Coast Guard families come and have a dinner with us at no charge. She was taken aback when told that there were 200 employees in Duluth affected. We weren’t really in a position on such short notice to help quite that many folks. In the end about 8 families dropped by and joined us. One of the Guardsman recognized me from my recent appearances on the News and asked if I was the fellow who did the snow sculptures. He really enjoyed the one about the President/New Year’s baby. So did his wife. I guess missing a couple pay checks has not left this loyal American with much sympathy for his/our Commander in Chief.

My four hours of rumination last night left me with a number of things to post about later today. Because I’ve not blogged much my head needs a good emptying. I still keep putting more on my plate. I have yet to finish my application to substitute teach in the Duluth Schools but I’ve sent an inquiry about try outs for the Duluth Symphony Chorus. Its been a few years since I was a member but despite threats of running for the School Board I find myself with more time to rejoin it……if they are that desperate for a baritone.

My French lessons are chugging right along. I have a new 90 day streak of practicing. I would love to follow up my September trip with a week or two surrounded by non English speaking French speakers. A trip allowing that might be in the works.

But first more thoughts on the Mafia (which BTW are known to have deep tentacles in the garbage hauling business.) 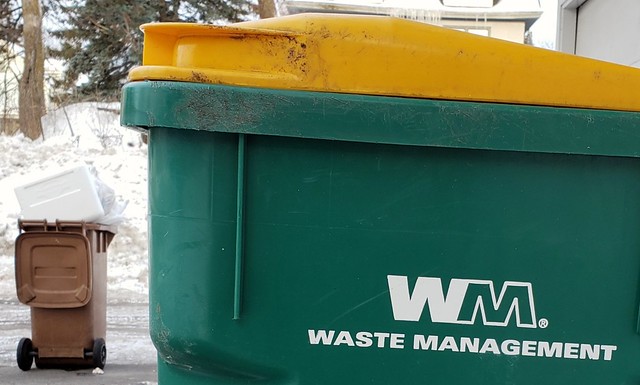 And after snapping a picture of our iced over lake I stopped to take this picture of our garbage container which has missed two Friday pick ups. As I was contemplating this shot a neighbor backed her car up to ask me if I was having problems with Waste Management. Oh yes, I told her, I’ve missed two pick-ups and had called their hotline to report our growing debris six times. Each time I was assured they were going to do a quick pick up. That, more than a glitch in pick ups is what irritates me. I can imagine how a new driver perhaps missed us once or even twice. But to have their hot line folks tell me that they were going to fix things time after time and let me down is hard to take. If they miss my garbage a third Friday I might just paint a half dozen signs and post them in my front yard pointing out how they have left me with crow enticing sacks of garbage in my driveway.

Like the mafia I know how to break bones. BTW our recycling has been picked up regularly.