Yesterday I woke up at 5AM and decided to swim laps for a second day straight after my three year layoff. I quit initially because fighting the School Board left too little time for personal fitness.

It was probably while I was listening to Public Radio that I got the idea of buying a box of pastries for our local Occupy Wall Street tent encampment downtown. I’d enjoyed looking down at them from the Radisson a week earlier. They are more laid back than the protesters of my Era and every bit as fuzzy about how to “fix” the ailments they are concerned about. They are sure a lot less self righteous and less Dittoheadical than the Tea Partiers. I generally like them and their fuzzy focus.

I figured that I’d wait till after my swim to take them food. I wasn’t sure any of them would have crawled out of the tents much before eight. Its gotten a little cold outside. When I finished I headed over to a bakery and as I put in an order for 4 dozen mixed donoughts a lady behind me said yum yum I’ll follow you anywhere. I told her she’d have to head over to the OWS protest because that’s who was going to get them. The baker gave me a little discount and told me he had some friends there.

I slipped in a little cash thinking that the bakery good were more of a morale booster than anything else and wrote that it came from the 5%.

This is what I make of the OWS. For years Americans bragged about our streets of gold and viewed ourselves as a country where anyone could succeed with hard work. This graph suggests that this is no longer the case. 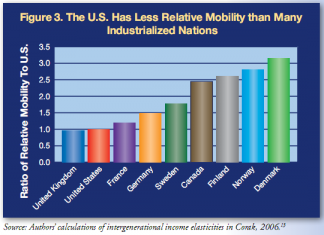 And here’s a piece that gives more detail on how we are putting our social mobility at risk.