A couple years ago Claudia and I tried to visit Jupiter Florida’s Busch Wildlife Center. We drove over on a day the Center was closed so it remained a mystery to us but this morning, with my Father-in-law in tow, we made another attempt. I was pleasantly surprised.

There was no charge but we left after I bought a jigsaw puzzle for my Christmas routine and left a modest donation. Like a similar rehab center for animals we visited in Australia the Busch Center takes in any injured or lost animal that folks bring to it. Its like a modest zoo in Florida scrub land. Oh, the summer mosquitos took a small withdrawal too but thankfully mostly from Claudia who is just like a freshly baked apple pie resting on the window sill for them. They mostly treat me like an old pie crust.

Of course the animals of Florida are a little less exotic but there were three beautiful endangered Florida Panthers. 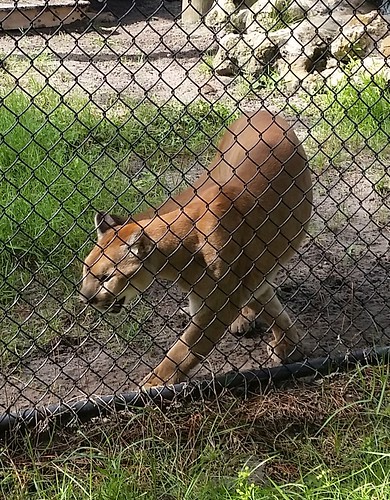 One of the volunteers told us that two of them had been confiscated from a mall that used them lure children who could pose for pictures with them when they were cubs. To make them safer the pumas had their claws surgically removed as though they were house cats. Of course, when they no longer were cute for photos they had no chance of survival in the wild without weaponry. 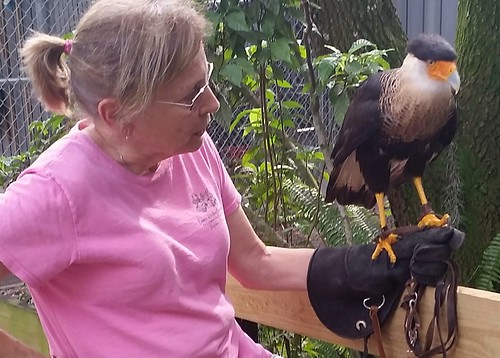 This feathered fellow is a caracara which I associate with National Geographic nature films about the Andes in South America. I asked if they were native to Florida and was told a bunch of them blew off course years ago and some settled near one of the lakes. They are now refered to as “naturalized” like human immigrants turned citizens.

Of course lots of Florida’s invasives are not blown off course but are intentionally set free by pet buyers who can’t bring themselves to keep caring for them. These include the nile monitor lizard which can grow to six feet in length and happily eats cats – which may please the local song birds.

I first visited Florida when I was seventeen so I have a few reference points to compare. Until ten years ago I only saw anole lizards many of which are also invasive but so small as to be pretty non threatening. About ten years ago at my Father-in-laws Jupiter home he encountered a new invasive called a curlytail which hails from the Bahammas. We visited him and he told us how a month earlier he had trapped the critter in a gutter tube where it still lay. Curiosity and sympathy prevailed and I took a look and found the prisoner still breathing. I set it loose in a palm grove nearby. Today his yard hosts not only hundreds of anoles but a half dozen of the curlytails. I saw two of them trying to intimidate each other on the driveway yesterday and it only took me ten seconds this morning to find another one to photograph. Here it is: 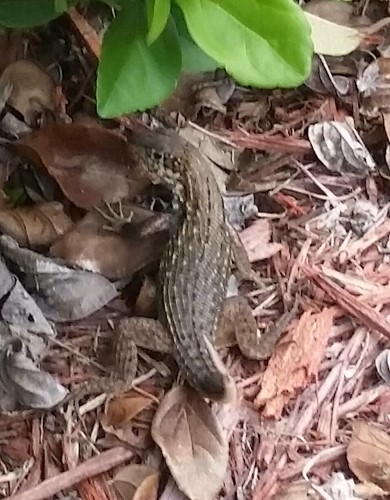 Florida pet owners seem to be as careless as Minnsota fishermen whose boats carry zebra mussles from lake to lake notwithstanding the DNR’s efforts to have boaters scrub them off. The first newscast we heard upon our arrival last week was about a herpetologist who reported that his cobra had escaped. They are still looking for it in Tampa but that’s on the Gulf coast so I’ll only have to worry about being killed by burmese pythons that eat alligators over here on the Atlantic coast.

I’ve posted pictures of other wildlife I’ve encountered on previous visits to Florida including a corn snake, a manatee and the rescued sea tutles at another Jupiter animal facility the Loggerhead Marine Life Center. Posting notes on Jupiter is a welcome relief from my usual political palaver.

Florida must be the exotic species capital of North America. The northern curlytail only one of dozens on this impressive list of invasive Florida lizards. Other than the constrictors and cobras new Floridians will take them in stride and no doubt even consider them regulars as the years go by. Which of us baby boomers didn’t get used to watching westerns that included songs and scenes mentioning the cowboy’s favorite bush, the tumbleweed? They came over from the Russian Steppes along with red wheat and took over the landscape.