Two nights ago I half watched a PBS documentary on the Texas School Board which has out sized power in determining what gets put in the nation’s text books. I was busy whittling down what had been a twenty-inch thick stack of untended Duluth News Tribunes dating back to 2010 to clip and file stories mostly related to the Duluth Schools. The central character in “Revisionaries” was the Board’s chairman, a nice fellow and practicing dentist, Don McLeroy. 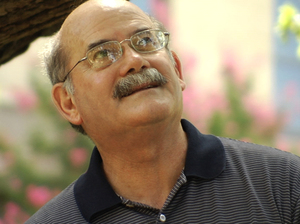 For ten years Don has been inserting creationism into science textbooks and taking Thomas Jefferson out of History books. Because Texas orders books statewide for all their public schools unlike most states which allow their school districts to purchase textbooks most textbook publishers base their books on the Texas School Board mandates and have done so for several decades. That might help explain why among the western educated nations the US had one of the smallest number of folks who accepted evolution, 28% of the population.

A few years ago when I was running against Roger Reinert for the State Senate I campaigned in part on my proposal to forbid any Minnesota School District from buying books that had been designed to accommodate the Texas standards. Roger, I support the Red Plan, Reinert won that DFL primary.

McLeroy struck me as a naif. He and his Board majority require the teaching of creationism the latest alternative to evolution saying that science hasn’t decided between the two “theories.”

The thing that no one else comments on is that this silliness not only turns biology on its head but all other sciences. For his part Dr. McLeroy was shown explaining to some grade schoolers how Noah’s ark was plenty big enough to hold two of every animal in the world. McLeroy believes that the universe is only 6,000 years old. He laughs off dinosaurs living tens of millions of years ago.

But If McLeroy is right then the light from distant stars has only been traveling for 6,000 years. Those who keep up with NASA may know that the medium sized galaxy we live in is 120,000 light years across. It takes a photon of light that many years to traverse the distance of the Milky Way if the physicists are right about this. In a 6000 year old universe we could only see stars about 1/20th of the way across the galaxy. All the others would be as good as invisible to us as well as the galaxies beyond our own. The astronomers have been telling us that their new telescopes have given them a peek at regions of our universe where light we now see began its travel toward us almost 13 billion years ago. Don’s creationism can not accept this.

Since light, a major preoccupation of physics, travels at roughly 186,000 miles per second, Don McLeroy’s universe and the universe of astronomy and physics are irreconcilable. I hate to think how much money we’ve wasted NASA.

Likewise, geology is being taught all wrong. The non-Biblical Earth is 4 billion years old having formed slowly by matter’s coalescence in a ring around what was to become our sun. At first the Earthly blob was mostly cool but it warmed up through friction as it was bombarded by comets and asteroids turning molten. Huge reservoirs of radioactive metals at its core kept it warm until a thin crust cooled. So, say the scientists but all of this geology, astronomy and physics get’s tossed out on its head in Don McLeroy’s 6,000 year old world.

I think there is a larger irony for McLeroy than using his position on a state school board to moot and undermine all this science. I think a larger irony involves his misunderstanding of his own religion, Christianity.

Don made it clear that he does not just have faith in his positions. He knows that his religion is fact. The creation of the universe that he feels is backed up by the Bible is a concrete truth. McLeroy is not an arrogant man. He’s more of a Sancho Panza following his Quixotic scientific belief. There is, however, no humility in this knowledge. The ark could hold all ten or twenty million animals that could have been collected by Noah. The world is 6,000 years old.

But it is not certainty that the New Testament offers. Jesus offers his follower’s faith. It is enough to believe through faith that Jesus was sired by God of a virgin. It is enough to believe that he was crucified, dead and buried and that he rose again from the dead and ascended to heaven to sit on the right hand of God. The reward for for people who have faith in the message found in the New Testament is eternal life. God bestows his grace on people of faith. This is not good enough for McLeroy who apparently survived his public school years without drinking too heavily of science. No, Mr. McLeroy has to place his science lite creationism along side evolution as a co-equal. Nothing can be left behind to undermine faith.

Joseph Stalin might have appreciated Mr. McLeroy’s concern. His purges stunted of a generation of horticulturalists and evolutionists who he replaced with Lamarkian “scientists” like Trofim Lysenko whose theories, Stalin was persuaded, fit better with dialectical materialism.

Of the twelve disciples I most identify with Thomas and his famous doubt. He refused to believe the litany of the Apostle’s creed until he was able to place his hands in the wounds of the crucifiction. Jesus then chided him for his flimsy faith thereby honoring the unquestioning faith of the other eleven.

McLeroy doesn’t really have to worry about the teaching of the birth of Jesus in American textbooks. Tens of millions of children in Sunday School classes have accepted this rather than quarrel with their elders or church. But evolution is different. Many mainline churches grew to accept evolution without considering it a threat to their overall faith. This is not true of McLeroy. He is a fundementalist and he can’t have public schools undermine the faith of students who might begin to doubt a seven day creation. Creationism has to be put in textbooks as a legitimate theory much like Lysenko’s theories had to be put in Joseph Stalin’s textbooks. Doubt must be stamped out. Faith can not be trusted. Or perhaps, like me, Don McLeroy would have been a Thomas but unlike me he finds this thought troubling. He can not trust children who are taught mainstream science to ignore it. He must insert nonsense into America’s textbooks because he can not trust mere faith to uphold the Godly world he wishes to enforce. To me this is a demonstration of Dr. MeLeroy’s faithlessness not his faith. I do not see how God can grant grace to a man of so little faith.

Perhaps, it is even a rejection of the Constitution’s expectation that the state will not promote religion.

Increasingly Dr. McLeroy’s Creation science is Republican science. It may, however, not remain Texas science forever. Dr. McLean was defeated in his run for reelection to the State education Board by about 450 votes. Still, the standards he and his fellow Board members approved for Texas, (and consequently America) will be in force until 2020 or another seven years.