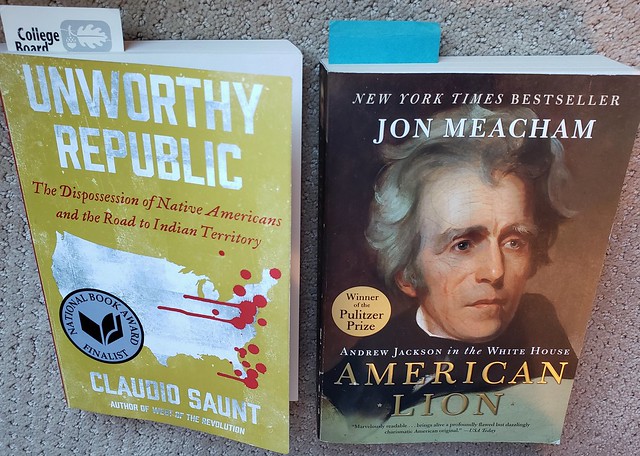 It will either be Covid or history books that shelves my plans to canvass for Jen Schultz over the next couple weeks. The typhoid Mary part of the illness is over now after ten days but it has been good for focusing me on both my French practice and History reading.

I’ve have just resumed the last book on the list below me. Its lead title is “Unworthy Republic.” You can also see it next to another book I began reading ten years ago American Lion by Jon Meacham. The latter won a Pulitzer. I got half way through it before setting it aside and you can see where I left off in the blue bookmark.

I will finish Unworthy Republic which is by an historian who teaches in Georgia where much of the action begins. The action is the beginning of the push to send the Indians of the Deep South to concentrations camps in Oklahoma. Oops, I mean Reservations.

I have a grandson with Chickasaw and Choctaw ancestry running through his blood and I feel an obligation to find out more about his ancestry. I was born four miles north of Oklahoma and remember visiting Arkansas City years later with my parents and hearing someone we visited telling a story about the stupid indians who lucked into lots of oil on their lands. The story he told went like this. An Indian is given a lot of money from his well so he buys a car which quits when it runs out of gas so he goes out and buys a second car… Har Har Har.

I had an Osage Indian kid in my sixth grade class. Just what Sammy’s family endured became apparent to me a few years ago with another book I bought for my wife who read it at my suggestion. Killers of the Flower Moon

Its subtitle is about the birth of the FBI. Its about the widespread application of a favorite tactic by white men through American history of marrying into Indian families and then betraying them. I read dramatic examples of that in 38 Nooses and just last night in Unworthy Republic. Think Jefferson’s black children.

I have another column to write for the Reader and yesterday I started by writing one about several of the books I’ve been reading over the last month or so to wit: (with apologies for using only links to Amazon’s book sale pages)

Some of this reading of mine has been prompted by my wife’s recent reading which I’ve mentioned here. I also keep my French pen pal up to date on my reading and she took an interest in the book called Six Weeks in Sioux Teepees by Sarah Wakefield.

I don’t know if I’ll ever attract attention in my quixotic quest to rescue Lincoln from the John Wilkes Booths of the Republican Party but for several years as I’ve studied French I have imagined writing about America for a French Audience……as a sort of reverse Alexis De Tocqueville. Which reminds me of one of many unpleasant Republicans, Newt Gingrich, who helped corrupt our Democracy 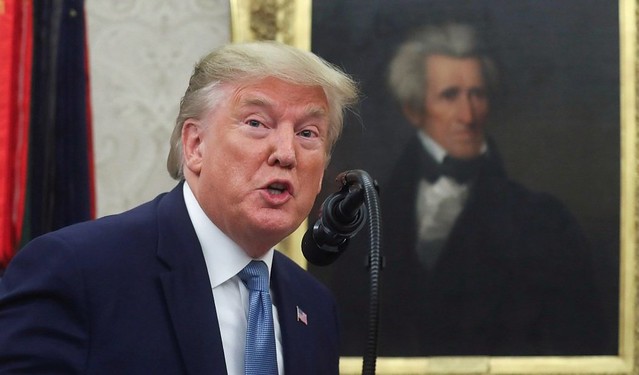 Which finally brings me to the image at the top of this post and the one immediately above this sentence.

As I was reading Unworthy Republic I was thinking back to the book by Meacham on Jackson which I only read half way through. I couldn’t remember much being said about Indians other than that in addition to killing a lot of them he adopted one. So I looked at my book and at the chapter headings. It doesn’t look like there is a heck of a lot in it about the mechanics of driving the Indians along the Trail of Tears. Suddenly that strikes me as a terrible oversight…….so about the picture just above of Trump with Jackson’s portrait behind him in the White House….

The great irony of Trump’s putting Jackson’s portrait in the White House is that more than any politician since John C. Calhoun Donald Trump has divided America. Jackson would have hated that part about him even while he might have winked at Trump’s obsession with white tiki-torch bearers. Trump is an ignoramus who only knows that his shit smells better than everyone else’s. Someday the children of Trump’s cult may figure this out about their parents and grandparents MAGGOT…….as they seek shelter in what’s left of the Republican devastated Earth.