Fresh from watching a video of a Trumpian coffee shop owner attempting to zip tie an Arizona principal for not letting unmasked children risk infecting all the other children in her school I’m feeling another surge of exasperation at the forces of darkness sweeping over one third of America.

Frankly my studying French for the past four years has helped distract me and keep me sane. On the hundredth anniversary of my Grandfather’s war injuries in the trenches of France in 2018 I only had nine months of French under my belt and it was useless to me. This year with four years of study under my belt I have reached the stage where I will be able to speak crappy French fluently wherever I go in the month of October.

In 2018 I bought a couple french language books for future study including my grandson’s new favorite in the Wimpy Kid series. 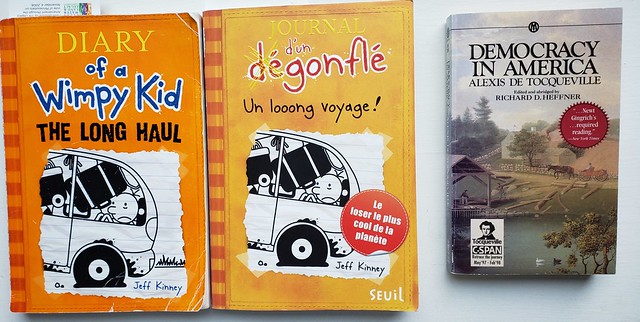 I can almost read it now and you can see my Grandson’s book in english beside it. I have several distant goals one of which is to buy the original French version of Alexis de Tocqueville’s analysis of “Democracy in America” based on his year’s long travels in the America of the 1830’s. I want to read it in French in the same way the real Christian Scholars we know as the “Pilgrims” learned to read Hebrew and Greek and Latin in order to understand the Bible. That is why our first University Harvard was established. Understanding the Bible is something our era’s instant Bible scholars would never bother with lest it interfere with their collection of tithes from their zip tie prone congregations.

About these Zip tie Republicans…Note the magnification on the paper back copy of De Tocqueville. I bought back when then Congressional Majority leader, Newt Gingrich, was recommending books on democracy to they Russians of the 1990’s who were seriously studying law and our constitution in hopes of creating a new Democratic Russia. Gingrich was busy posturing back when he hoped to propel himself into the Presidency with this show of fidelity to Democracy. His show of patriotism wasn’t worth the US flag pinned to his coat lapel. 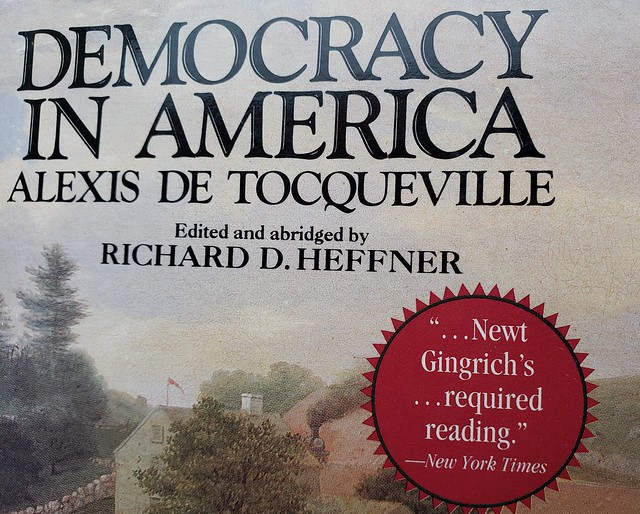 The disgraced Republican “Democracy” promoter Gingrich has exposed his true colors by sucking up to Donald Trump and joining the conspiracy to overthrow the 2021 election. The man is a traitor and not simply an embarrassment to the memory of his party’s founder. The French have a word for Gingrich’s kind, “putain”.