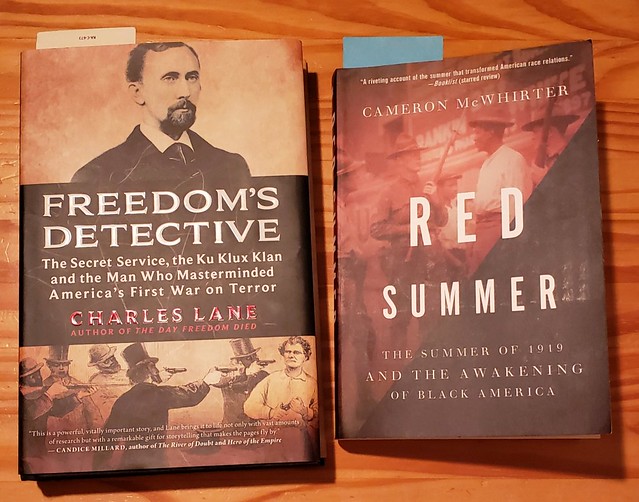 2 AM. I blame the three brownies I ate during the last night’s Democratic Presidential debate for waking me up at this hour. I blame Donald Trump for not letting me get back to sleep. So, a post with many days rumination is in the making starting with these two books I’ve nibbled at this year.

Since returning from France last year I’ve pretty much given up reading history books. Too much history is being made at the moment and I’ve been preparing for my school board race and just maybe aim at restoring something Lincolnesque to the cesspool that has become the Grand Old Party. One of the candidates said it best last night when asked what she would do if elected President. “Clorox the Oval Office,” she said. Brevity may or may not be the soul of wit but I haven’t thought of a better four words. I do, however, have a pretty good post brewing with seven words: “Donald Trump is White America’s Al Sharpton”. Of course Trump is much more than Sharpton. He’s Sharpton with a reputed billion dollars, the Oval Office and millions of twitter heads. And he’s so good for modern Israel. “Jews will not replace us!” He can’t even find fault with his supporters who march like Nazis through Nuremberg bearing torches while defaming the religion of Ivanka and Jared.

Trump has stolen a page from George Wallace, Strom Thurmond, Lester “Axe handle” Maddox and Theodore G. “America’s most notorious merchant of hatred” Bilbo and done his best to release the toxic worst of America. He’s had a lot of help from Fox News, Rush Limbaugh and the generation of amoral political hacks who called old fart Republicans like me RINO’s and primaried us out of the Party in thirty year purge. Its not just the Presidency that could use a good dose of clorox. Evangelical Christianity could use a good swabbing too.

After I crank out my book on education I plan to turn to what happened in the GOP. The two books above are part of my continuing education. The book above Freedom’s Detective caught my eye in a bookstore. It covers the years after the Civil War and a dashing spy who got a first hand view of how the Ku Klux Klan terrorized the South. I’m not far into it but I got a new appreciation for the Red spread across America’s rural areas. Like rural areas of many modernizing nations the rural areas lag behind and look inward with a chip on the shoulder about urban elites. “Liberalism” an idealistic term suggesting tolerance toward others was treated as a commie conspiracy. Black Americans never ventured far into this vast rural terrain north of the Mason-Dixon line after the Civil War. There were exceptions up north. I once read about a black musician who moved into Windom, Minnesota. He became a beloved and exotic band director. Had he come up with others the community might have grown suspicious. One was enough. When my wife’s family was selling their house in Des Moines, Iowa, in the early sixties the neighborhood panicked when a black realtor showed up.

In the South there was nowhere safe to be black. It was even worse in rural areas where they outnumbered whites. Lynchings could go unnoticed there by all except church goers whose members stopped showing up. Reading about the spy who was working to protect freedman as white supporters were murdered reminded me of how the Serbs in Kosovo purged their Muslim neighbors of the last 400 years. War is a ground game. You may control the skies but if you can’t control events on the ground you’ve lost. Today’s Republicans control the countryside and rural electoral votes. The Civil War’s sepsis has spread over the farmlands of the North in a Red Republican wave. Thank you Moscow Mitch.

The other book is about the year 1919. That was the year after my Grandfather returned from France a shot up hero. Its about the wave of white riots throughout the nation where murdering blacks was rampant. Duluth’s lynching the following year was an after shock. Back then the Republican Party had a conscience about the mayhem. Lincoln was dead but not forgotten as he is today to the Grand Old Party.

I’m sitting between fury and puckishness an hour after I began this post. I don’t feel like editing it yet but I will share the link to my campaign Facebook Page I assembled from pictures I’ve gathered together this year. I hope they are each worth a thousand words because at the moment I just want to go back to bed.