I turned in a column to the Reader back to back one week following the next. It was modest and a bit of a retread but I discovered today that it hadn’t made the cut. I sent the editor a note suggesting that it be used for New Years. It’s titled Christmas Payback so if it comes out the following week the title won’t match the holiday but what the heck. This dark season is festooned with holidays and they all sort of slur into one another. In my case my December birthday is part of the traffic jam.

I am enjoying the holiday with my grandsons unmasked. It will come to an end all too soon when they get back to meeting other people in school outside our quarantine. I taught them carroms a couple days ago and the table is set up behind me in my office. Actually I had my older grandson read the rules. Good practice that. Yesterday waking up to an unexpected three inches of sticky new snow I had them help me pile it up on top of the turkey I made for Thanksgiving. In three three hours with my grandsons lending their backs to the transfer of snow we managed to make a creditable “Baby Yoda.” Its a creature from Disney’s Mandelorian series. We had to wrap up late in the solstice dark but one car stopped to compliment them on the results. It needs more attention today and some Christmas colors. My daughter was a little jealous because I never let her help me when she lived here. 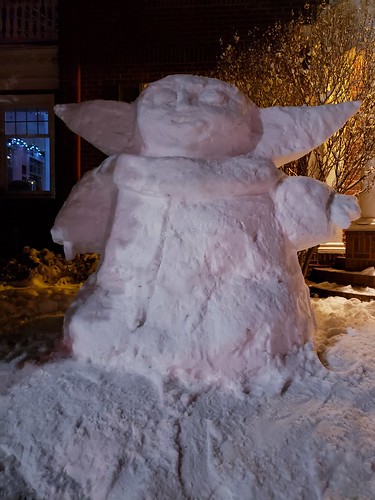 I haven’t much picked on Congressman Pete Stauber. He’s getting plenty of criticism as it is by others. He sided with Trump’s anarchy over democracy and I did share a Washington Post Cartoon that depicted the 100 plus congressman and State Attorney Generals who wanted to throw out the results from states that went Democrat over Trump. Bastards is too nice a term for them but the cartoon depicted them all as rats with their names attached and one of the rats was Pete. It was an imprecation that was well earned. Some Fox News commentator named Joe Concha reacted by calling it anti semitic. Whoever he is Joe Concha appears to be a shill and a horses ass.

Meanwhile, as Joe trains his guns on the media our wannabe dictator hides in his White House bunker trying to find a rationalization to impose martial law on the states he thought should have voted for him.

America is broken and I’ve been watching this slow but sure demolition derby ringside with the Republican Party since the Dixiecrats took over the party and began a purge of Lincoln lovers like me. So when I coulnd’t fall asleep last night I got up and pecked out my thoughts that need to be sorted out perhaps in a book. Even that didn’t clear my mind so I turned to two hours of practicing ever more complicated French in Duolingo. That didn’t quite clear my mind either. I got no sleep last night.

Here is the text I sent myself at 2AM of garbled one-liners, typos and all, in a stream of conscious that barely covered the nightmarish Niagara of thoughts that kept me from sleep:

Racism is now unamerican but Trumpism is so blatantly racist it is blind to its racism. It is blind to so many things. No one is more blind than black trumpists.

Now trumpers are as hysterically blind as he is. My pillow guy just one of many.

Why this is all z part of my singleton vote for George h w bush.

The cheap faith of anti abortionists. Even the tiki-torch crowd can hide behind fetus worship.

Trump’s lifelong hatred of New Yorkers who laughed at him behind his back has been fused to the other malignancies of the Republican party. Only thing preventing its secessionists from seceding is having to cut loose from the big city majority population that is the center of culture, education etc.

The country club crowd never had the stones (bad taste) to challenge the ugly evils taking over their party. Like Hitler in 1933. The most cultured and literate society in the most cultures and literate nation in the world. Not the most impoverished nation like Mao’s China.

But these angry festering malignancies soon stifle culture and reason. Venezuela was once the most advanced nation in South America. Today is college educated women must prostitute themselves to feed their children This happened in Zoran too.

Good order requires the eternal vigilance that the country club set has handed over to the lower classes as too common for them to care about.

The Bunker Hunt bros on the 1970s have found new avenues to push their john birches that are far more invasive than the super powerful A M radio station the hunts had. One thing that links them to billionaires today is their confidence that its OK to make money by any means necessary.

Today’s GOP has a long history of unfettered the rich to take advantage of the poor like with pay day loans.

All this so rolls my mind I suspect my spirit won’t rest unless I spend the rest of my life in the GOP lions den to make them see what this horrid collection of snakes have tied them into a knot to kill the liberal Republican decency of Abraham Lincoln in its ignorance and arrogance.