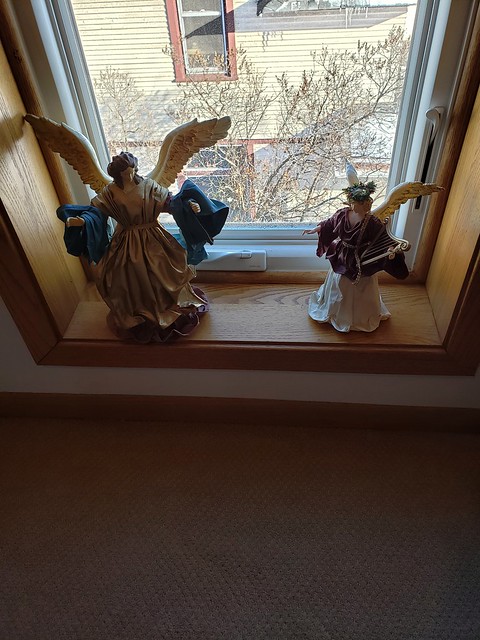 Over the weekend I became a father-in-law for the second time around. I am very pleased even if the ceremony was limited to my son my new daughter an officiant and a photographer. Greetings and congratulations were extended electronically.

My grandsons and daughter came over maskless for the forth day in a row. They have scrupulously avoided other people for a 14 day period in order to assure Claudia and I good long lives.

I put almost the final touches on a ten year plan to organized forty years worth of documents. A few still remain out of their final resting sites in my offices adjoining storage room. In most cases I simply have to removed things from three ring binders that are too large to fit in my filing cabinets. However this is no more than an hour or twos work. I was sufficiently lightened that I began writing perhaps the fifth iteration of a book last night. A fifth iteration of a book that might end up combining all the elements I’ve been attempting to sew together into a first book since my children’s novel composed and published back in 1992. I’m about to see if I can extend that new beginning by a few hundred more years before my grandsons descend on us in half and hour.

All our Christmas decorations are up and I even put some angels up in my office for the season. They are angels we have left in boxes for about fifteen years.

A moment ago I checked my stats and was pleased that on the day I linked the last post with my latest Reader column its hits and page views grew four or five fold. I guess when I have something to say there are still a few people out there who still lend me their ears.

There are a few more ornaments on my list like, for instance, finding my mind free enough to compose this blog post. And another is coming in seconds. Its ties in with my last Not Eudora Column and the Duluth News Tribune’s explanation for the law behind the years that Duluth School Board members are elected to their jobs. That’s where I’m headed now. To the next post.