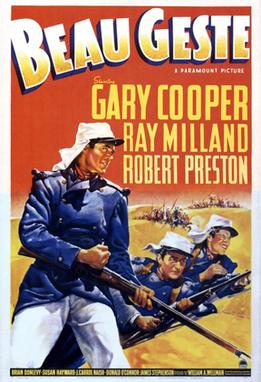 “Wacky Wednesday” continues. Even though vacation bible school has taken the place of school Claudia and I are still hosting our grandsons on Wednesday night. For the past four months that Claudia has checked the homeless into to the CHUM center on Mondays, Wednesdays and Fridays I gave up my Wednesday Choir practice to pick the boys up from school and get them to bed. Until this summer that meant gluing ourselves to PBS’s Nature program to watch cameras being inserted into fake animals for closeups, hummingbirds in slow-mo and crocs attacking wildebeests. Last night I was curious to see if the first movie to capture my imagination might entertain them – 1939’s black and white Beau Geste. That movie made Gary Cooper my role model for years to follow. It was an adulation which was only heightened a few years later when I saw the only movie I ever watched with my movie-phobic Grandfather.

Both movies were made in the magical year 1939 but, would the boys, aged 7 and 10, turn up their nose to Geste after Pixar classics too numerous to mention? Not at all. Good story telling wins out every time and Geste had them, like it had me, from the first look at the grim specters lining Fort Zinderneuf’s crenelations.

Even 30 minutes of frustration trying to remember my Amazon Prime password and trying to push the right buttons on the blasted remote followed by the boys pushing each other’s buttons and being sent to their rooms until they apologized didn’t dampen the movie. When they complied with their grumpy Papaw’s demand I gratefully reciprocated with my own apology. Then I told them that the movie would show them brothers who were loyal to each other. (I have to take advantage of every opportunity to give a sermon.)

Beau Geste lasted one hour and 52 minutes and was near its end when Claudia got home a little after 8. She put on her bath robe and joined us to watch as the movie finally answered its lingering mysteries and as the three brothers became one. Sorry, that’s a spoiler.

As Digby Geste sounded his trumpet for the last time Claudia gasped, “that’s the Music Man! You saw that movie with us.” We surely did and they liked that 1962 classic too with a much older Robert Preston playing Professor Harold Hill.

Claudia suggested suggested that I read to them from my Calvin and Hobbs collection because their summer bedtime gave them an extra hour. I also read C and H to their Mother and Uncle Robb with gusto when they were the same age. The boys were enchanted too although the Tan Man wrinkled his eyes and asked how a six year old Calvin could have such an adult vocabulary. I told him that Calvin was P-R-E-C-O-C-I-U-S just like he and his brother were, and besides, if he was going to get picky why didn’t he object to Calvin’s having a talking tiger.