In the last hour I have done three campaign related things while in hiding from the cononavirus.

In no particular order:

A. Having been born in the decade of the 1940’s, albeit with only 21 days of it left to inhale (born December 10, 1950), I am just shy of age 70. I am almost old enough to run for President! But I have to prove my mettle to young skeptics of the aged. Yes. I can still identify an elephant. Heck, I have sculpted them three times in snow. If you are good at Google searches you can probably find all six of my elephants. (One time I sculpted a herd)

But can I manage to walk down an incline without pitching forward. I’ll admit a year ago my balance got a little iffy on me but here I am this morning practicing my go-to corona virus exercise regime:

B. I just ordered $150.00 of Facebook advertising in the northern exurbs to go along with my $100.00 ad buy for St. Louis County. I now have ads going out to 325,000 of the nearly half million people who live in Minnesota’s eighth District. My first ad featured my police state post and the ad to the exurbs will feature my cheaters and crooks post.

I think these ads are great political purgatives but I only have one more ad buy in my banking account unless some of you readers add to the pot in the next couple of days. You can help purge a Trumplican here:

WELCOME TO HARRY WELTY’S CAMPAIGN CENTRAL click here
If you feel the same way I do about Trumplicans help me spread the message on Facebook with a donation.
https://donate.fundhero.io/welty4congress

I am also working hard to stay mentally fit by continuing my study of French which began three years ago just before my 67th birthday. Corona virus wiped out my 45 day stay in France which would have begun in October with my wife who was planning on learning french cooking while I learned to speak French. I might actually be able to become conversant on my own thanks to almost three years of daily practice and the discovery of a wonderful French pen pal. I’ve gotten to know S. well and in fact discovered that S. has a child who collects stamps. That’s something I used to do as well. My Dad got me started as a way to learn the world and I became a geography teacher. So I sent my pen pal’s offspring an initial 600 different US. postage stamps which finally arrived in France yesterday. I’m in the process of picking out another 1,000 or so stamps for the offspring. I am not quite done but I snapped a pic of the ones I’ve put in see-through envelopes to mail when I’m done. Here’s the pic: 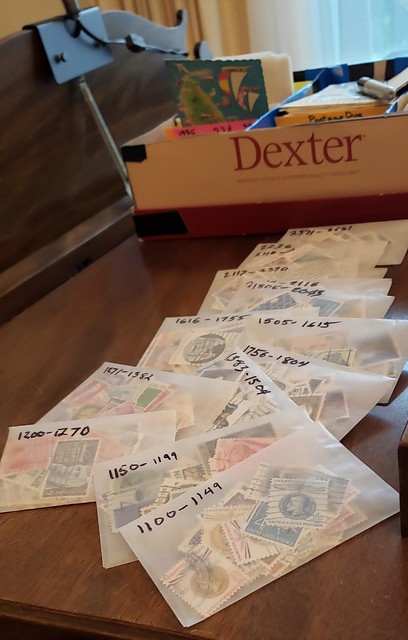 and here is a little tortured riffing in French to show you my progress:

(I can not tell a lie. A translator was used to clean up my mistakes)