One benefit of my blog is that folks to take the trouble to look up my email send me interesting information. (You can find it by clicking the “Talk Back” link at the top of the list to your right) A couple years back a very interesting commentator on Brandon Stahl’s blog emailed me and we keep up an occasional correspondence. He just sent me this longish email and I found it very interesting. The quote I’ve used in the heading refers to a phony claim by politicians and bureaucrats that keeping videos of public meetings available on line would be expensive.

I was tempted to run for county board here because NO ONE apparently has filed against a 15-year incumbent. I would have no chance of getting more than 25%, if even that, so it’s throwing away a $50 bill on the filing fee.

Another county board astronaut who takes up space has no opposition either.

The issue here regarding the county board has been their self-appointed salary increases. Two big increases a few years ago. One was 20% then a few years later another 25%. Just last week they are planning a 2% increase. Ramsey County is a charter county (I’m on the charter commission) and the charter stipulates that any pay increases they give themselves have to be done before July 1, to let the voters have a “referendum” of their own in that fall’s elections by voting the rascals out.

They never do. All of them have been on the board for years and now their salaries are approaching $90,000 a year. Each of them gets an assistant, or chief of staff, whatever you want to call it at a salary in the $50k range and of course there’s all those benefits . . .

The other question no one can answer is – what do they actually do? and is this a full time or part time job? They keep bankers’ hours at best.

There was a recent effort on the charter commission to attach census figures to their salaries — that the median income of the county residents would serve as their salary, which would have dropped their salarie down to the mid-50’s. This was defeated easily on the commission because of the 17 members, 13 are DFL insiders.

I sent the attached material to the legislator who got the bill passed forbidding city employees from running for city office. It’s a step in the right direction but needs to go further. How can an AFSCME official get on the city council and make contracts, on behalf of the taxpayers, with AFSCME? Yeah, right, they can “abstain”. B. S.

Another tidbit about that Google crap: When is Duluth going to stand on its own two feet? Never! Always looking for someone else to pay. Now they want Google to put in a free broadband network. What happens when Google goes under? Who’s going to pay for maintenance? Does city hall want to be in the ISP business and should it be in that business? Even worse, do we want Google to be an ISP?!!!! The company has a history of spying on people and selling information, etc. They even send cars out with cameras to take pictures of us and our properties. (I saw the Google car in front of my house when I happened to be outside, and gave their camera “the finger” like Nelson Rockefeller) 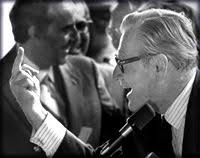 Editors note. Harry Welty inserted this once infamous photo
There was a good program on Coast to Coast a few nights ago about the evils of Google, Twitter and that Facebook nonsense. All of them are in the newspapers every day with reports about lack of security, selling personal information, etc. We do not want any of these characters ruling the internet – they should not be ISPs or build broadband lines.

I can’t believe that Miller Dwan doesn’t have a sophisticated broadband system that could be expanded. It’s probably already being
used in Duluth, but only by certain elites. Also if Google was the ISP there, it would surely put all the other ones in business there now, out of business.

About the council chambers and media: I heard they are going to start doing video web streaming of the meetings. Hopefully they will retain an ARCHIVE of this material. They don’t keep archives of anything – they take it off the web soon after.

I also don’t like that the Monday night meeting is available only live on KUMD. No file available anywhere afterward.

Video streaming is way overrated. It’s more important to have a higher quality recording as the archival record. Streaming/podcasts, and
whatever you want to call it are just ** reference ** tools – they aren’t archive quality. They are a sound or visual representation of
the minutes of a meeting – at least that’s how I look at it. (Ramsey County is still in the dark ages; their only recording of meetings is the low-quality streamed file. They cannot provide a playable DVD of any of their meetings if anyone ever requested one)

The one good thing is that the audio files of the Thursday “secret meetings” are available, but only until the next meeting comes along – yet, they maintain an archive of the Charter Commission audio files. Makes no sense. Just remember that every time you hear the excuse “we don’t have enough space on our servers” – that’s a lie. These days space doesn’t cost anything. There’s no reason why they can’t have more archived material on the city web site (which is a crappy site by the way – not much more “improved” than the previous version)

I’m also still waiting, for years now, to see the council meeting packets online. Cripe, why is no one asking for this. They probably get 400 pages for those Thursday meetings – let’s see them. My impression of the City Clerk is that he is an obstructionist type – doesn’t believe in transparency or providing any information unless there is a gun to the head.