This is a pic I snapped last September in Dijon, France. It shows one of forty or fifty waiter/waitresses in a race around the center of town the chief qualification of the half mile or so race was not to drop anything from your tray. While we were in Dijon we were a block away from a “cinema” that was showing the Spike Lee Movie Blackkklansman. We had some spare time but didn’t know if it would be in English with French subtitles or Dubbed French. We passed on the movie. Tonight after watching Lee’s movie at home we both rather regretted missing it in France.

The movie which takes dramatic liberties about a real story concluded with an unexpected segue from a cross burning in the movie to the White racists marching with torches in Charlottesville, Virginia chanting about Jews not taking over America and fighting with protesters. It cut to Trump saying people on both sides of the fighting were trouble and then showed a car that plowed through people protesting the racists from several angles. It was sobering. We wondered what it would have been like to see how a French audience would have reacted to it. 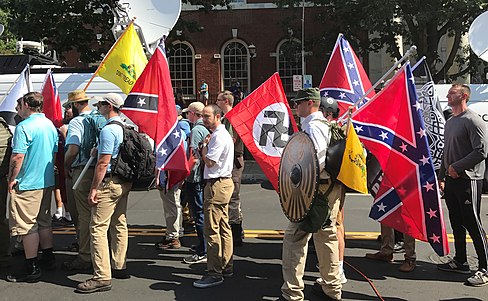 It reminded me of my experience in Dallas or San Antonio, Texas when my family took one of our summer vacations. Dad took us all to a spaghetti western in a downtown theater. It was full of Mexican-American men, mostly young. They so enjoyed watching the gringos getting shot up during fight scenes that I for one felt ridiculously out of place being a gringo myself. Had we been seen in that France movie house depicting racist 1970’a America no one would have known we were Americans. We probably wouldn’t have said much when leaving the theater.