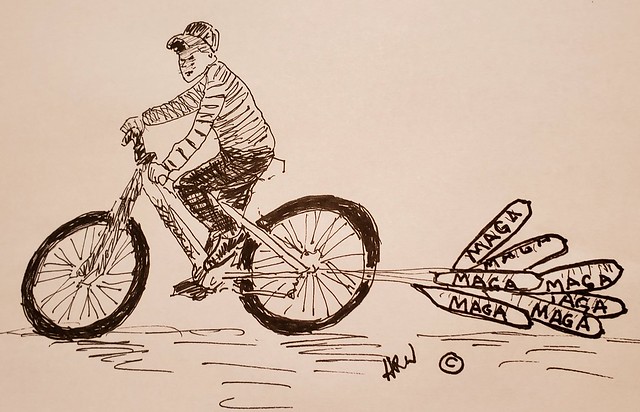 Brady Slater’s piece about my Cheeto-in-Chief sculpture and its temporary decapitation was fine by me. However, as a diarrhetically, self analycal writer I would have written a different version of my work.

Had I noted the drubbing I got at the hands of the Eighth district’s Trump cult I would have emphasized that the extent of my protest campaign was a $300 filing fee, gas to Hibbing and back and a couple hours filling out candidate questionnaires. Under those circumstances getting ten percent of the vote was a triumph and proof that, like the Jews after the holocaust, not all moderate Republicans were dead.

But that’s a quibble.

I thoroughly enjoyed Brady’s description of me as a “political provocateur” even though, when I set out on a political career, that is the last thing I would have imagined I would become. I still regard myself as the most reasonable politician I’ve ever met. I would probably have been reluctant to sign on with the Declaration of Independence in the beginning. I might also have retreated from Abe Lincoln’s resolve to stop secession in its tracks. I would have wished for cooler heads to talk over grievances. In my most notable local crusade demanding a vote on the half billion dollar Duluth school construction plan I was too slow and reasonable for my side’s ultimate success. My Dad was an attorney but I am no eager litigator.

In my college years there were lots of long hairs my age eager to provoke “the establishment.” I had little use for them when their words were middle fingers. I winced when one of them wrote a popular how-to-manual found in bookstores everywhere titled, “Steal this book.” People did.

But while slow to anger and quick to cool my parents held the example of my Grandfather up to me from my toddling years on. He was not just a war hero. He had been awarded his nation’s highest military medal of honor for bravery in the face of the enemy. When the stakes are high I’m all in and will meet fire with water.

I first heard the verb “provoke” from my Grandmother Welty. “I’m so provoked.” That’s what she would say in her calm, teacherly voice. It was typically small irritations that would provoke her, flies in the house, a missing piece of silver, a leaky pipe. In the face of these “provocations.” I never saw her lose her composure. However, raising my Uncle Frank, might have raised her hackles higher. He once found a pack of his parent’s prophylactics, blew them up like balloons, tied them to his bicycle and rode it and their contraceptives around the block. One time she was so provoked that she ordered her husband to put the whole family in the car and drive to the nearest boy’s juvenile center to scare her son Frank into behaving himself.

As Lincoln, and the Founders he revered would have said, they were not the provocateurs. The real provocateurs were a distant government taxing colonists without consultation and southern politicians subverting the constitution to violate the ideals of the Declaration of Independence. Ditto for me when the Duluth School Board levied a half billion dollar tax without asking voters for their approval in a bonding referendum.

So, who is the true provocateur here? Could it be a Presidential candidate who rallied his supporter to lock up his opponent? or shamelessly lied his way to the White House or who hired legal bullies to enforce this theft from business partners? or who may have colluded with foreign agents to make himself richer and compromise the laws and security of the United States? or who didn’t just avoid taxes but illegally evaded them on a colossal scale? or who so threatened the Republican Party that he resembles the tin pot dictator of Venezuela who destroyed his nation’s once booming economy?

Me, a provocateur? I spent twenty hours building a snowman and painted it cheeto-orange. In the spring it will melt and drain into Lake Superior. In contrast the man who was its model has acted the demagogue, kleptocrat, and put nearly a quarter millennia of fragile democracy in jeopardy.

And as for MAGA. A better acronym would be Make Average a Great America.