For several months I got used to talking with french folks online who were on their computers while I was still waking up. In the last couple days I’ve had to get used to no news when I wake up because American is still fast asleep. Its noon before America news outlets wake up.

Again I’ll let my post from Facebook speak for today’s experience on the road for the first time and add a couple of the photos I uploaded to it:

“Today we drove west to the Atlantic and the old port city of Honfleur where England’s Henry IV launched an attack to take back France. There were two of us driving, watching the road, reading unfamiliar traffic signs and getting used to the quirks of French cars. But today it was only my hands on the wheel. We got off the highway to see a long abandoned abbey and quaint villages with narrow streets that put side view mirrors at risk. Then we strolled Honfleur’s streets and visited the church built by shipwrights that has a hull for a roof. Claudia lit a candle at its memorial for the lost EorldWar I soldiers of Honfleur.

We brought pear cider, Camembert and a loaf of corn pain (bread) back to our room for an inexpensive dinner.”

I’ve only just realized that I didn’t rent room close enough to the the Normandy beaches for a long stay there tomorrow. We will have to start early for St. Malo tomorrow in order to have a couple hours at Normandy.

Some pics for you starting with proof that I really have been here in France:

And a selfie with our pear cider and Camembert: 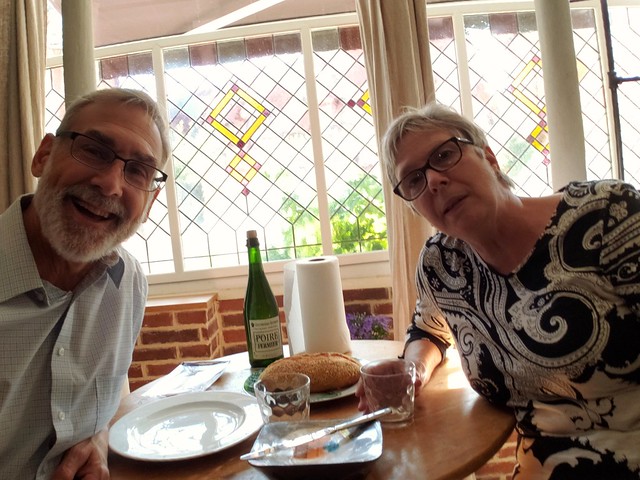