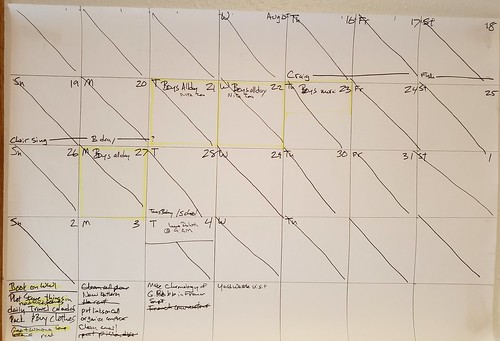 For two years I’ve been salivating over the prospect of traveling across the battlefields that my Grandfather fought on one hundred years ago. For nine months I’ve studied French the language and read about France the nation. For five months I’ve known the route I would travel across France and then I continued doggedly to prepare for the trip despite a ten week detour to make my disgust of Donald Trump’s attempt to sabotage my Grandfather’s legacy of sacrifice clear to the people of Northern Minnesota. Tomorrow I will drive with my wife, Claudia, to board a plane bound for Paris.

After the election I slapped this skimpy calendar on my office wall to keep myself on task. I am almost ready to cross off the last full day before my departure.

As for my travels I recently ordered a Michelin Road guide to France. We’ve rented a car. No canned tour for me. I have ploted the places we will be staying for the next thirty days. Each of the sub maps where we will stay (numbered 1 through 300 plus) found in the guide has been colored orange except for one. That one is marked marked in yellow. That’s where my grandfather fought and earned the Congressional Medal of Honor. Here’s that full map of maps. 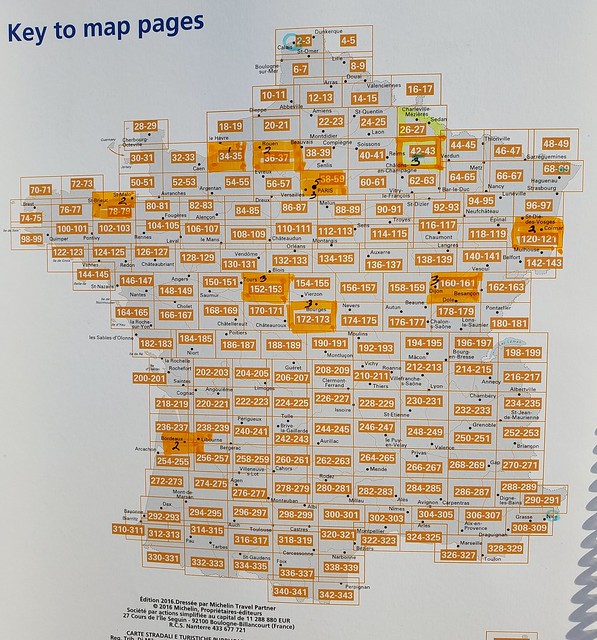 I will be on that battleground on Sept 26th when America’s Meuse Argonne offensive began one hundred years to the day before. For those trying to make sense of my progress I begin in Paris for three days and then travel counter clockwise northwest to Rouan, where Joan of Arc was burned by my ancestors, then on to Honfleur where my ancestors attempted to reconquer France and then on to the Normandy Coast where my ancestor’s butt’s were saved by an American Army. Then we will turn back to the southeast and the Loire River Valley where the Kings of France first rose to prominence after the black death. We will take a train to Bordeaux in the south to look at wine country. That trip will begin at Tours where the Moors were stopped in their tracks by Charlemagne keeping Europe a bastion of Christianity. Then it will be back to Tours and further east to Bourges and then on to Dijon, another wine region. After that we will turn northeast towards the Alsace where the German forebears of my grandfather’s mother’s left for America. My Grandfather may have shot up some of his cousins from Sept. 26th to Sept. 29th before they returned the favor with whiz bangs, and machine gun shells until he was ordered to a medical tent in the read where he suffered a gassing. His arms were too riddled with shrapnel for him to put on a gas mask.

This will not be my first trip to France. In about 1994 we took our kids to England. Towards the end of that trip we boarded a ferry to cross the North Sea. We spent five hours in Calais, France, and drove into Belgium where I ordered us a pizza even though I couldn’t speak French. I pointed to something on their menu. A decade later Claudia and I took a Mediterranean Cruise for our thirtieth wedding anniversary and made a ten-hour stop to tour France’s Rivera coast and Provence. You might just be able to make out two tiny blue circles I placed on both Calais and and the Rivera. This journey will be more substantial.

I will be leaving my computer behind. It remains to be seen if I will post about my travels or simply share my photos on Facebook for my more immediate friends. I do plan to submit two columns to the Reader while I’m away. I think writing about my travels will be hard to avoid.