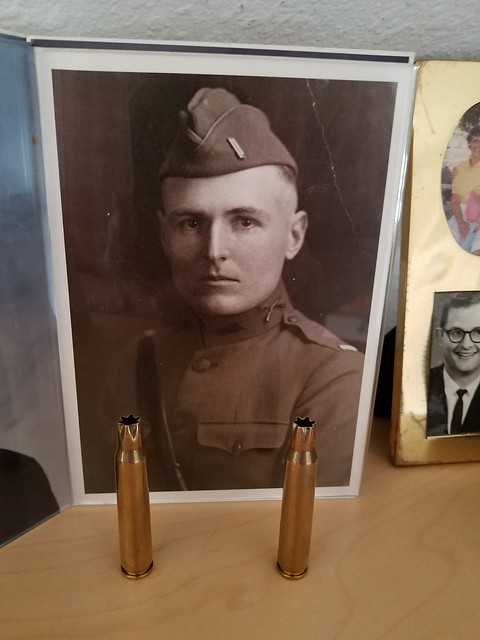 Ah that’s better. I’ll give you an update after I get my hour of french practice in.

Before we left for Florida a second cousin of mine notified me that his father, the last remaining nephew of my Grandfather had tucked away three shell casings from the three rounds of rifle shots that were fired at my grandfather’s funeral in 1972. He asked if I wanted them and I told him he should feel free to keep one as a keepsake from his father and that I would likely keep one and give one to another cousin.

There is a tradition I had not known about American military funerals. One shell casing from each of the three rounds fired is given to the family along with the American flag that draped the veteran’s casket. The casings stand for Duty, Honor and Country. The two that I have are for the moment placed upright above my computer in front of my Grandfather’s photograph. I don’t know which is missing, duty, honor or country.

For a year or more I’ve contemplated visiting the battlefields of World War One to honor my Grandfather. I’ve also long contemplated writing a book about him and the America he experienced and fought for. In these perilous American splintering days that book is more important to me than ever but in recent weeks as I’ve read about France, the war George Robb fought in has been nudged aside as I’ve read and studied about our two nation’s long entangled history. Two hundred years ago the French King made our liberation from England possible and paid for it with his life. American’s have felt a debt to France ever since.

In more recent years so called patriots, mostly Republicans, have taken to ridiculing the French. They even abandoned French Fries for “Patriot Fries” much as during World War I Germany’s sauerkraut was renamed “Freedom cabbage.”

I have broken some of my chains this last year. I’m off the Duluth School Board and I’ve given a rest to the notion of writing a book NOW, TODAY. I have instead obligated myself to writing a once every two week column for the Duluth Reader but I’ve pulled back my posts to Lincoln democrat. I’m also reading more than ever although a lot of that is still news related.

Today we worked out an itinerary. Tomorrow we will start booking rooms.