I knew what I had to do immediately upon opening the Trib’s Opinion Page. I got an old sign board, scrubbed off the old painted message and painted a new one. 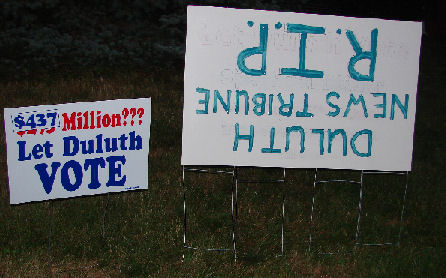 It’s bad enough when the Trib writes stories because it has been snowed. Its happened before. In fact, it’s one of the critical elements in a book I set aside writing about one of Minnesota’s greatest scandals to defend the right of Duluth citizens to vote on the Red Plan. In that case the whole state was snowed by the attorneys for a lot of Very Important People who wanted to perfume their dirty laundry rather than wash it. But it’s quite another thing for a newspaper that knows what’s going on to do the snowing itself or (which may be the case here) to bend over backward not to know.

Today’s Opinion piece has been queued up for a long while now just waiting the chance to be written. The occasion was an ostensibly neutral forum by the Duluth Chamber of Commerce to discuss the pros and cons of alternatives to the Red Plan. If it was anything like the Chamber forum I attended a year ago it was a stacked deck. That Forum was salted with Red Plan supporters who, after the forum was over, voted overwhelmingly in favor of the Red Plan. The Trib being the Chamber’s unofficial newsletter reported the jiggered results as though it was news. The candidates challenging the School Board this year knew this and decided to skip the forum. Big Whup! Voters who want to know what’s happening in our schools can’t trust the Trib to report it.

I took the Newspaper’s editors to task two years ago for not speaking up in defense of Duluth’s voting rights. If the Duluth News Tribune isn’t going to be a watchdog for its reader’s why should its readers care whether Forum Communication’s stockholder’s lose money on their over-leveraged menagerie of small town papers?