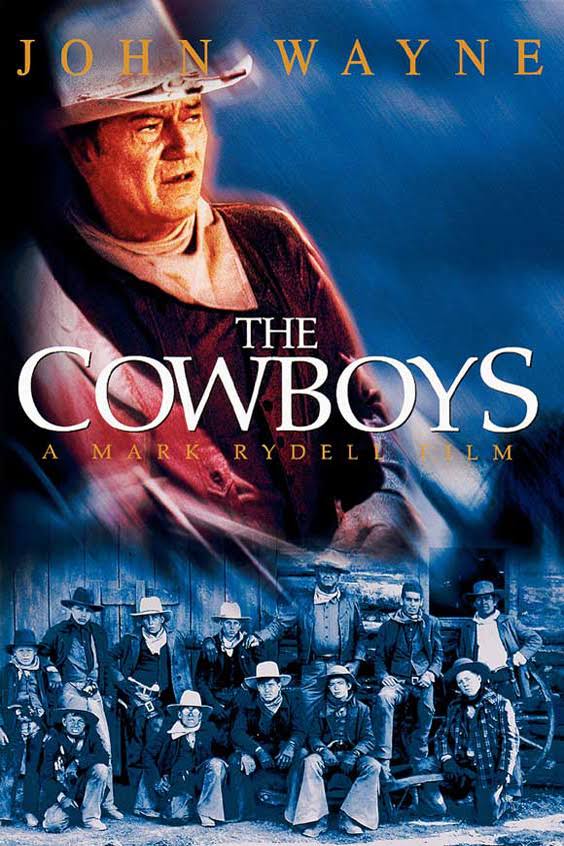 I’m always thinking back on movies I think will appeal to my grandsons. Beau Geste was a hit and so was John Wayne’s 1972 The Cowboys.

I haven’t seen the movie since I turned voting age 45 years ago but my recollection was that it was a great ride about an old cowhand forced to hire school boys to drive his cattle to market. Being made in the hippy era I thought the worst sins of Hollywood would be modest and for the most part this turned out to be correct. Claudia was worried about Native American’s getting the short end of the stick but I couldn’t recall that they made any appearances at all. One of my Grandsons traces a slice of his ancestry back to the Five Civilized Tribes which calls for a little extra sensitivity.

There was just a hint of the subject. One boy shows up with an attitude and a 30-dollar gun. Asked by Wayne about himself when he tries to join the drive he tells Wayne that he’s “a mistake of nature.” Could he be part Indian? The fight he starts with a school boy moments later starts with his insult in Spanish about another boy’s mother. The other boy knows enough of the language to take exception to the remark. John Wayne takes the “mistake’s” gun and kicks him out despite his remarkable display of horsemanship. What follows is a nod to Horst Buckholz’s role in the Magnificent Seven with the mistake shadowing the Cattle Drive until he rides to the rescue winning redemption, gratitude and acceptance.

The film also deftly handles race when the drive’s cook shows up. He’s not who Wayne’s character hired. He’s black, courtly, confident and a raconteur. The N word is bruited about two or three times in impeccable usage that showed the sting but redounded against its users. After the movie it led to a followup conversation with my youngest grandson. What is the “N word” he asked and without saying the word I explained. Then he wanted to know what the “C word” was.

Unlike boys of my generation my grandsons rarely see cowboy themed entertainment. It took a while for my younger son to get into the story-line of a gold rush emptying out cattle country of cowhands. I particularly enjoyed the short appearance of Slim Pickens as a barkeep. Early on there was some brotherly get-under-the-skin foot-kicking back and forth on our sofa but the movie grabbed their attention by the time the “cowboys” aged 10 to 15 had to prove their mettle by riding a nasty little bronco for a count of ten to be signed up for the drive.

Wayne chews up the scenery as expected in his familiar role as a cowboy icon. At the end of his career he also played Rooster Cogburn in True Grit and a dying ex gunman in his final picture, “The Shootist.” His Wil Anderson in The Cowboys is a satisfying role and the only false note for me was a scene where “Wil” cures a stutterer with a conservative tongue-lashing about growing up. It works, of course, as it never would in reality. However, Wayne’s terse, no-nonsense, screenwriter polished, conservativism is vastly more eloquent and appealing than the vitriol being tweeted today from our seven-year-old Commander and Chief. Sad.

The chief reward for a kid watching this movie is the idea that young kids can step up and take on the tough jobs adults do – even using guns in the heat of battle. Sometimes it comes at a cost, as it does in the movie. My alphabet word curious youngest wiped tears away once, but this movie doesn’t coddle its audience. Instead, it routes Bruce Dern’s nasty cattle rustlers and gets the cattle to Belle Fourche as you knew it would.