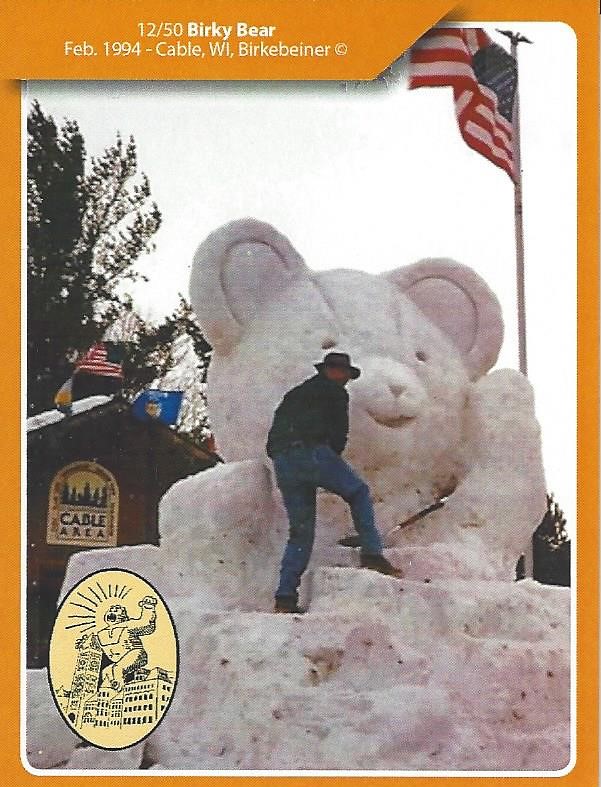 Shortly after I sculpted Bill Clinton in 1992 I added a saxophone for him to play. The AP (Associated Press) sent out the DNT’s photo of it in all directions and WDIO did an “on the Road” video about my making the Clinton bust that preceded the addition of the instrument. I had relatives around the nation call to tell me they’d seen it on their nightly news programs. That began a series of requests for me to make other sculptures elsewhere that allowed me to come up with far more than thirty snow sculpture trading cards.

One of the first venues to call was Cable, Wisconsin which wanted to get a little of the Birkebeiner glory that mostly went to sister city Hayward. I went there three successive winters and ended with this teddy bear. I was paid. Given a room in a local hotel. And the snow was piled up by heavy machines. It was heaven.

This is the final project I made for them and my inspiration was “Snuggles” the bear. It would be my last because I finally was elected to the School Board in 1995 and the five (leisurely) days I took to sculpt for Cable took a back seat to my new responsibilities on the Board.

This third attempt was almost thwarted by a heat wave which almost derailed the ski race. I finished a couple days ahead of the race’s start and poor snuggles melted to a heap of nothing. I got a frantic call from Cable begging me to return and fix it up and extracted a promise of a team of snow shovelers to help me loft the snow up fifteen feet. The replacement was done in a day and never quite achieved the snuggliness of the original. That has been one of the many challenges of sculpting snow – the weather. Often I finish on a hot day by the time the dark has descended and I can’t get a decent photo. The next day an evening’s melt can leave a bedraggled sculpture in its wake or melt it completely so that occasional passers by will never even know it graced my yard.

As I began passing out my packets one family had small children in the yard and I told them about the cards. Not all of them are cute. Certainly Donald Trump snarls out from the cards he is imprisoned on. But in this case a little girl found snuggles and squealed with delight about getting the teddy bear. I enjoyed that squeal.