A few minutes ago I grabbed my gym bag and got ready to head to a pool to swim laps. Swimming a thousand yards seemed vastlp preferable to continuing to pick up my office and sort through the detritus of my recent campaign. Trouble was I forgot that I had taken my second car in to put on snow tires. Claudia was with her book club so I disconsolately tromped back up to my office and turned on Pandora to listen to the Arron Copland station I created to write blog posts. I’ve been putting off my eight loyal readers for almost a week now satisfied to leave the most recent post where it was rather than cover it up with a string of less important additions.

Its only about 1200 words but they were very personal to me and I was very pleased with what I’d written. On the other hand I often second guess myself after such posts, even those I go over carefully edit. With some trepidation I just reread it and other than finding the word “sexed” instead of “sex” in the next to last paragraph I found it every bit as satisfying as I remember feeling about it upon first posting it.

I have often pulled my punches for the past four years of being a school board member. I know that this statement will shock a few people that I’ve written about but I have. Pulling punches is a habit. Abe Lincoln would write hot letters to his critics but then put them in his hat to think on and usually discarding them a short while later. The act of writing a response settled him down although he had as long a memory as any other person. He put up with his Secretary of the Treasury Salmon P Chase for a couple years because he had not practical option to dump the man who was helping figure out the complicated financing of the Civil War. But when the opportunity to dump Chase turned up he did so without a second thought…….except that he also gave Chase, who desperately wanted to be President, a royal send off making appointing him Chief Justice of the Supreme Court. Not a bad second act for the politically duplicitous Chase who nevertheless shared many of Lincoln’s political views.

Just before his assassination Lincoln was talking about traveling abroad for the first time in his life with Mary Todd Lincoln. He was ready for a second act himself which, however, would not be over for another four years of his second term. That never came to pass. His second act was as Martyr to the cause and civic saint.

My second act is about to start in a month’s time and I’m already slipping into it comfortably. I started growing a beard, still seedy at this early point, at my youngest grandson’s request. Maybe no one will recognize me. I have stopped hoarding unread Duluth News Tribunes and will end a 22 year habit of clipping out every article about the Duluth Schools. I’m even tossing my school board meeting books. Twelve three quarter inch books for each month for four years will empty out a file cabinet drawer.

I’ve resumed reading. I just finished listening to a book my daughter raved about by Trevor Noah, “Born a Crime.” Actually I listened to it as an audible book while I put together my first jigsaw puzzle of our Holiday Season. Actually its not done yet. I have about 200 of the 1,000 pieces left to insert. Its a hellish puzzle we stated a year ago and which I kept intact to finish this season out of sheer stubbornness. I’ve got another five puzzles after it to keep working on after I finish it. This is how it looked when I started but by now almost all of R2D2 has been completed: 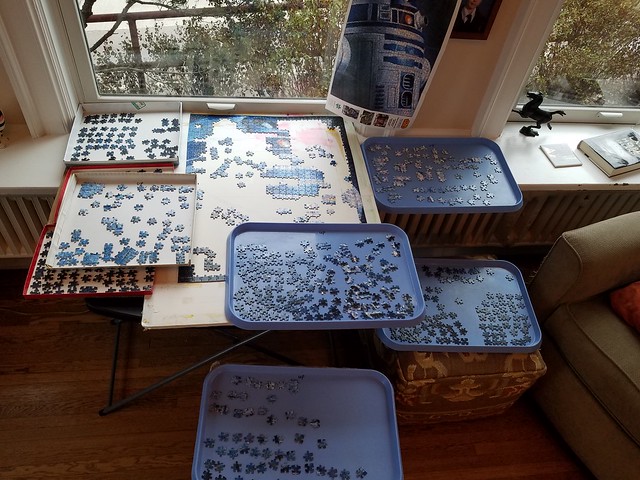 Noah’s book is a marvel and a far cry from Alan Patton’s Cry the Beloved Country which may be the last full book I’ve read about South Africa and that was almost fifty years ago.

I’ve complained a couple of times about how the campaign was so all consuming that it put an end to my book reading for a couple months. Actually I’ve read a fair number of books in 2017 many about China. (I just added Trevor’s book to the list and Lynne Olson’s as well even though I still have another 74 pages to finish.)

I’ve got a couple of Pulitzer Histories that are half way done which I’d like to add to the list. Meacham’s book on Andrew Jackson and Tuchman’s on Vinegar Joe Stillwell and a book about the financiers behind the recorporatizing of American Politics, Jane Mayer’s Dark Money. They will have to wait however as I’ve finally finished a chapter in Back Over There by a World War I enthusiast Richard Rubin. Remember, I’m hot to write a book myself next year about my war hero grandfather. He’s already made it into the blog with over 40 posts.

As part of my research I’m keen to travel to France and walk the battle grounds of the Meuse-Argonne. That’s what Rubin’s book is about. It was a helluva war and this tidbit from Rubin puts it into perspective. Experts say that the unexploded bombs and shells of the Great War still lying in the old battlefields exceeds all of the bombs and shells expended in the Second World War. Farmers don’t much mind collectors going through their lands, after asking permission first, because they can spray paint the old bombs that turn up in the wake of a tractor, orange.

I don’t have much interest in blowing my leg off collecting old buttons and cartridges but I’d like to get a gander at the land my Grandfather spent almost all of 1918 defending. I’d rather begin preparing for that more than I would tonight’s meeting about our use of Compensatory Education funds to keep parents in eastern schools happy.