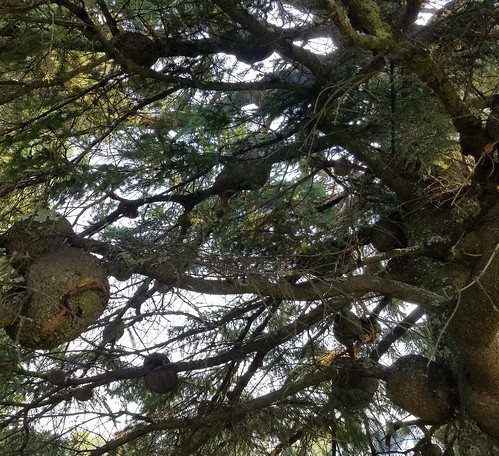 I walked under a pine tree as I knocked doors in Piedmont Heights and found it festooned with galls so that it looked like it was full of coconuts. Because of church I only had the afternoon but still got about three and a half hours in. Two full days should more than cover it although it looks like we will have a lot of rain this week. I’ve got five full days of stuffed materials to pass out fully loaded. I’ll be running short of my snow sculputure trading cards soon after that a quick ten thousand slipping between my fingers.

My handout will be a challenge. Unlike some candidates with glossy pics and little else I’ve put my last thirty years researching and writing about the District to good use. I think it will take serious voters over ten minutes to wade through four pieces about candidates who can turn the District around. I’ll put them on the blog in a week or two for those whose houses I will never get to. If I knock on 15,000 out of a likely 30,000 doors I’ll be doing well. I’m already at about 6,000 over the past thirty days. I figure that in this off-year election it will only be the most intense voters who will visit the polls and they are just the sort who might just read that much info.

And I’ve got reinforcements. Loren Martell is back at the Reader and he was very kind to me. He sums up the Duluth News Tribune’s editorial board much as I have and did me the honor of using my words to finish up his piece:

After the paper’s latest exhortation, Mr. Welty wrote in his blog: “Perhaps it’s time the editorial board looked in the mirror to find the ugly past.”

If the Trib ran across as many folks sour with the Red Plan as Loren, Kurt Kuehn, Art and I do they might have a better appreciation why their subscriber base has shrunk. The bunch of us run across very few believers any more and we still run across a great many who grit their teeth at mention of our current problems. Will they come out to vote though? That’s the million dollar question. Yesterday one fellow driving away from his Denfeld home told me it was a waste of time to vote. Next door his neighbor was in her garden and she told me she very much believed in voting.

I’ve been telling all the folks I see that I’ve been recommending candidates who will give our western schools a fair shake. No one has taken me to task over that position east or west.

The only thing likely to slow me down after a week’s lit dropping is affording more lit for the last six weeks. I’ve spent precious little time fund raising but this rainy week may give me a chance to give the DFL and Union contributors to the status quo candiates a run for their money.

Be prepared eight loyal readers. Pledge month is heading your way. As with MPR those of you who prefer to donate in advance are welcome to do so online here.

My snow sculpture cards will have shrunk from 10,000 to about 1,500 after the next five days. I need to order more. Long after folks forget I was on the School Board they will talk about the snow sculptures that that crazy fellow built every winter on 21st Avenue East.