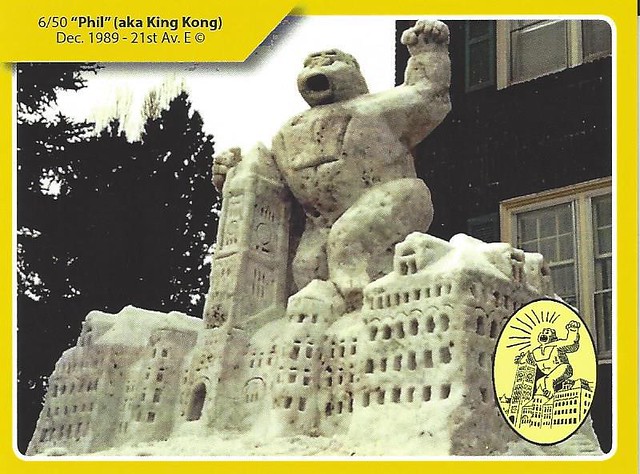 I only have 50 decks left of my snow sculpture trading cards. I have parceled out most of the 20,000 total cards printed house by house one-card-at-a-time as I’ve traveled the City. Unless I get a lot more donations that’s what I will do with the remaining cards. – break up the fifty remaining decks and pass them out house by house. It looks unlikely that I’ll ask for a third run of them. They may really end up costing $1000 on Ebay.

Procrastinating buyers will have to visit my campaign web page and put in an order before they are all gone. (I call it my “campaign webpage but frankly this blog is my campaign.”

About the snow sculpture above. Its the first sculpture I fell in love with and that expressed something I felt about politics. I made it shortly after losing my first of three unsuccessful school board races. In what I now call a “Golden Age” we still had our troubles and I pictured them here as a “monkey on the back,” King Kong raising his fist over Old Central. Later my wife and I would come to call him “Phil” from a Farside Cartoon.

In the corner of each card I’ve put the logo I designed for a short lived publishing house I wanted to start, “Welty Press.” You will see the same image of Phil on each of the trading cards down in a corner. As for the colors on the card’s margins – there are five, yellow, orange, red, blue and green. I’ve selected 50 of over 100 sculptures and put them in chronological order. Yellows were the earliest years; green are the most recent.

Phil made another visit to my home after yet another campaign loss and this time he was a really big gorilla, about 16 feet tall from the sidewalk up. He was put on weather forecasts all over the nation after one of our local stations started the trend.

I’ll put up a card-a-day for the next 16 days to remind you to put in orders before the last fifty decks disappear. Better hurry, Some entrepreneur may decide to buy all 50 remaining decks as an investment although, if I get an unlikely avalanche of requests, I might order a new run of them to meet pent up demand. Don’t count on that happening. (Though I did just get a very nice donation with a note telling me to keep the cards for the campaign. Gosh, was that ever nice!)