I didn’t go door to door yesterday. I managed to get some writing done and distribute some of the trading card decks that have been ordered. I picked up some lawnsign stands and, for the moment, I’m caught up with envelope stuffing for door to door work.

I enjoyed a long conversation with a supporter who wanted to tell me about an idea for the use of Central High School. It was interesting but I doubt it would make much money for the District. Its an idea being championed by a lot of ex employees at Central who are sick at the thought of its being vandalized which has begun to happen as it sits empty.

I joked that our retired teachers probably didn’t have much use for me but I was told that is not the case. I’d like to think that’s true. A lot of them thought the Red Plan was an abomination. I theorized ten years ago that their union was doing its best to shut them up about it. I’m not sure the DFT has changed all that much since that time.

NOTE: In the first version of the next paragraph where I have bolded “to avoid meeting with me” I originally wrote “to meet.” I hate when I write the opposite of what I mean.)

Two years ago when I stuck up for a teacher who was getting short shrift for a lapse in judgement my reward was a slap in the face by the DFT. I don’t like being threatened so you will see rather a lot of posts connected to this one in which I explain a heckuva lot about the DFT’s cozy relationship with some board members. Its president had already rebuffed a number of my requests to have coffee with me. She continues to resist meeting with me one-on-one although we are quite cordial when we run across each other. We had a lovely chat about my trip to China on Labor Day. We even sat across from each other during our last teacher negotiation and were given a tour of Old Central’s tower to celebrate a successful conclusion to negotiations. BUT. If there is anything that sets me off its the refusal of a person to meet with me for coffee. One candidate for the School Board has bent over backward to avoid meeting with me since filing. On the other hand I’m meeting with Sally Trnka this morning as she accepted my invitation to meet. We might very well be on the Board together after November.

In this regard I often mention that my campaign chairman, former Representative Mike Jaros, and I first met over coffee just before I filed to run against him in 1976. I ran against him again in 1978. We have always had a cordial relationship since that time. In fact, his opposition to the Red Plan, because it placed a heavier tax burden on poor Duluthians, cemented our alliance. We don’t agree on everything. We have different positions on Charter Schools but not on public education.

The only way to build common ground is to communicate. Running away from having coffee with me is a lousy way to get along.

Ah, but I did have one unexpected conversation yesterday that took me back to 1910. I learned about the grandfather of one of my constituents, Martin Johnson, who was known city-wide as the “wrestling firefighter.”

I asked if I could take a picture of part of Mr. Johnson’s scrapbook and was given permission. You can see his badge, a portrait of the wrestler in his togs and a clipping from the Trib about his bout with Ole Samson who’s ribs got broke during one of their matches. 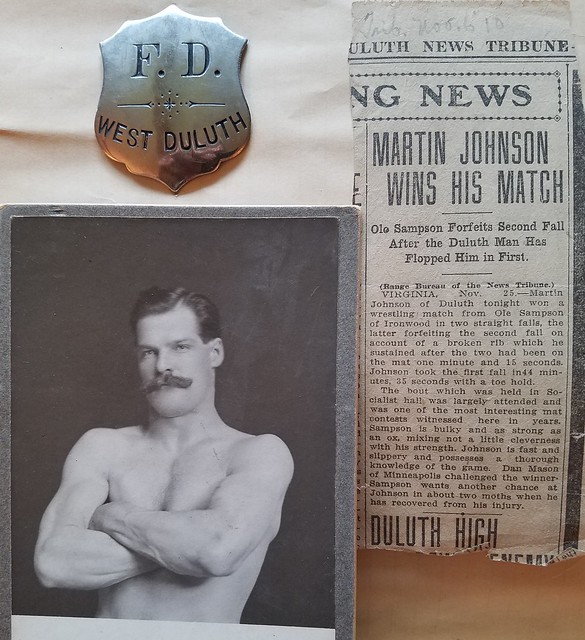