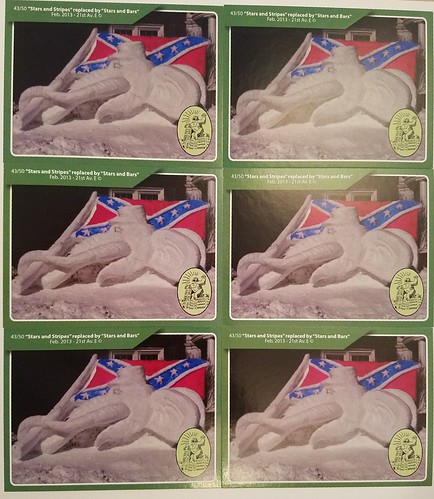 I have always been pleased by this snow sculpture. And yet at Bayfront Park’s Fall Fest one person winced when he looked at it. He was a teacher and was instinctively repulsed. Even after I explained its meaning he gladly accepted my offer of a more harmless looking snowsculpture.

Loren Martell warned me against using the spanking card (card 22 of 50) but I think even opponents of corporal punishment will find it sort of amusing. BUT THE CONFEDERATE FLAG???????

I took great care to explain this all to Robin Washington, one-time editor of the DNT, after he called to warn me kids were threatening to burn my house down over this sculpture.

After re-reading that post I realized there was little left for me to write about this 43rd card in my deck of 50, EXCEPT THIS: While I will keep it in the deck I send to donors I will pull every card 43 out of the cards that I pass out door-to-door or at events like Fall Fest. I think the other 49 cards in the deck will give this potent message of protest against the heroically denied racism of the neo-GOP a little context and cover. And it completes the deck!

And I will offer this for the irony challenged. This is a Rebel Elephant carrying the flag of the old Confederacy……The Elephant being the revered symbol of the Republican Party…..The party that was long called “The Party of Lincoln”…….who freed the slaves. They’ve been infested by southern Dixiecrat descendants whose grandparents loathed Honest Abe…..That’s why you rarely hear of Lincoln Day Dinners anymore.

I hope that makes it clear.