The last time I remember seeing tiny but obstreperous Tommy Rukavina he crawled out from under a table at a candidate’s forum I was attending as a Republican candidate for the legislature. Tommy died yesterday. After cleansing my front yard by replacing Cheeto Boy with a new snow sculpture I know just what to post under the picture of the new one. Its the last letter Tommy wrote to my favorite Minnesota newspaper, the Timberjay, before he passed on to that Union Hall in the sky. God go with you Tommy! 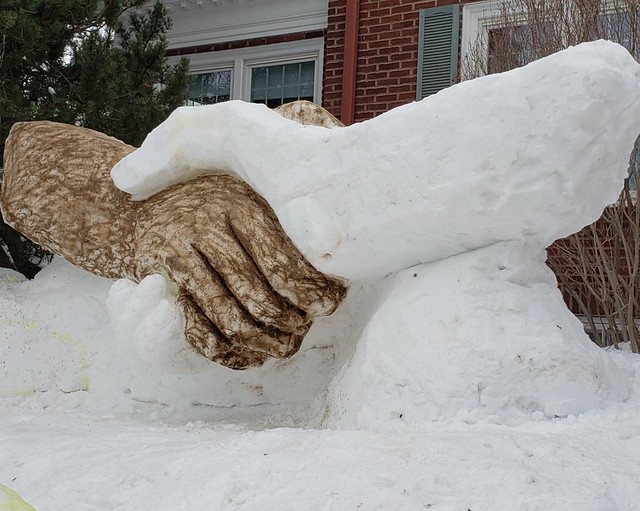 This is the last letter to the editor we received from Tom Rukavina (who over the years submitted many). At the request of a reader, we are posting it on our website….

Marshall, Your editorial on xenophobia touched my heartstrings. As your readership may know, I am currently in the University of Minnesota Medical Center receiving excellent care after my bone marrow transplant on Nov. 14.

Every day a nurse walks in who is a little different than me. She or he might be Somali or Hmong or Japanese-American and have a little bit of an accent – just like those old Croats I used to listen to on the northside of Virginia. Or, my nurse’s assistant may come in to take my blood pressure and tell me how she fled the war in Liberia when she was a young woman and what a wonderful opportunity it is to be here in America.

Then the housekeepers come in, they’re in a hurry, they say hi. They are Somali or Ethiopian or Liberian. One was a male who stopped emptying the wastebaskets and talked to us. About how he came from Ethiopia five years ago because of tribal conflicts. He already had a master’s degree in chemistry and is now working two jobs while going to school to become a pharmacist so he can give his three children a college education. He was particularly proud of his four-year-old daughter whose teacher told him was extremely intelligent. He told us his dream is that she will grow up to do something good for her country – this country, America.

I could go on and tell you that one of my transplant doctors is from Brazil and my primary oncologist is from India. She came to get her degree at the U of M and decided to stay on here to pay back for the great education she received from our state.

So, it’s puzzling to me that some of my friends and their children have forgotten that they are the children and grandchildren of immigrants. That they came to America for the same dream, to make life better for themselves and their families. And they were treated as badly as today’s immigrants. I can’t help but relay the story told to me by one of my dad’s best friends.

They had milk cows on the northside of Virginia and it was Bruno’s job, as a 12-year-old kid, to deliver the milk in the morning to the mining locations – Lincoln, Higgins and Minorca – which sat above the hill north of Virginia. One early morning on his way to deliver milk, he saw smoke coming from the top of one of the mine dumps, so on his way back after delivery he decided to climb up there and investigate. It was a smoldering cross put there by the Ku Klux Klan to intimidate the Slovenians and Croatians because they were Catholic, and the Finns who they claimed were radicals. He also happened to notice there was a little book on the ground. He picked up the book and put it in his pocket and he brought it home to his father.

His Italian father couldn’t read English so they brought it across the street to another Italian immigrant who could read English. The book contained the membership list of the Virginia KKK. Rinaldo got so scared he threw the book in the kitchen woodstove and burned it, because it contained the names of some very important “American” people in Virginia. To this day I still remember some of the names that were told to me that were in that book. Much to my surprise I’ve kept those names to myself, and all of you knowing my big mouth, it has been a chore to not blurt them out at times. But, among the descendants of those individuals were many good people. My hope is that someday, the descendants of those people who are currently creating so much hardship for our new immigrants, will learn that people are people no matter their color, religion or country of origin. That they are good people coming to the land of the free for the same reason our ancestors did.

On a final note, I can’t help but think that if not for the care of all these wonderful Somali and Liberian and Ethiopian and Brazilian and Indian and Hmong and Japanese immigrants that I’ve met here, I might be six feet under.

Hate helps no one, love solves everything.