I am a driving wimp. I like to let Claudia drive while I read to her. A trip to the Cities clocking in at 2.45 hours is OK and I can manage the drive back on the same day. More than that – backbone daggers.

There was a broken bolt on a pulley for the serpentine belt. Not fixable. A trip that I thought was given a still birth came about because my daughter let me use her vehicle while mine was left in Hinckley for repairs. My Grandson and I didn’t get into a hotel until 9:30 PM far too late for a swim as I’d promised him. And the weather forecast for the next day suggested another long drive into iffy cloud cover. But it mostly worked out. I had an old map of Nebraska in an almanac and I evaluated all the roads along full eclipse’s route and matched it with semi-reliable day old satellite imagery.

I had to wake my reliable 6 AM riser grandson at 7:30 to get a move on. From 8 until we crossed into Mountain Time Nebraska we were shrouded in fog and then covered by dense clouds. It didn’t look good. We passed by the Rosebud Casino where I gassed up my daughter’s car. Tan huddled over his cell phone playing games and I listened to all two hours of NPR on Nebraska Public Radio. Trump’s going to give a speech. He’s going to imitate the foreign policies of the Presidents he called fools for not abandoning Afghanistan. At best, he’s an annular eclipse.

As I raced down back roads through Nebraska’s Sandhill country I saw small breaks in the clouds. I was heading in a zigzag west and south nearing but never quite reaching the panhandle. I had Tan look at my map and tell me the times in each of a half dozen tiny towns that the eclipse was expected to arrive and the mileage to calculate which one to head for. I decided that Tryon, Nebraska, was within reach and as good a bet as any right smack dab in the center of totality give or take a mile.

As we turned south the breaks in the clouds grew wider. Soon large swaths of sandhills had sun shining on them. We began to see cars pulled off on this remote road with folks setting up lawn chairs to get a view of the show. It turned out a lot of them were Minnesotans who had taken the same roads we had.

As the time for eclipse neared I pulled over to get our eclipse glasses out and instructed the Tan Man to see if a bite had been taken out of the sun. He thought so and I still had 30 miles to cover to get to Tryon. No problem. The show was going to take an hour from start to finish. I sped up and that did me in. Doing seventy to outrace an eclipse in a sixty mile per hour zone got me pulled over by the friendliest Highway patrolman in Nebraska. My heart lurched when he asked for the papers my daughter should have had in her car – registration and insurance. It took some digging in the glove compartment but we discovered it was all good.

As the moon progressed to an eighth of the distance the patrolman issued me a warning ticket. As I promised to abide by the speed limit he told me I was already in the epicenter of totality. Recounting the experience to the Texans who joined us later I explained that this patrolman would never see a busier day on this quiet stretch of backroad for the rest of his career.

The garrulous Texans, a 40-ish son and his cataract suffering father, had just made a nineteen-hour trip from Huston. They had just talked to another Minnesotan who had made a nine-hour trip. I allowed that we had come from Lake Superior further north and had 14 hours under our serpentine belts.

The patrolmen had followed me after ticketing me and I lost the steam to drive into Tryon perhaps another 12 miles ahead. I knew I would still get at least a minute of totality from the point of ticketing and, when I found a hilltop overlooking both east and west, I pulled off the road and climbed a short distance warning my Grandson not to step on a snake.

Sadly, one of the wispy clouds moved in as totality approached by which time we could no longer move out of its way. Still, we saw the coronal ring as the moon’s shadow passed over. A friend’s email afterwards noted that some folks found the experience spiritual. I replied that I had experienced it with a couple of gabby Texans.

Its been twenty hours of solo driving for me in two days. I’ve got another six or seven to go from the Sheratan in Sioux Falls. (We hopped in the pool at 9 last night.)

I Facebooked our experience and, for those of you who will have to wait until 2024 for the next eclipse over the US, I’ll whet your appetite with these modest pictures of our hour in and out of the Sandhills.

By Rosebud at the SD/Nebraska border: 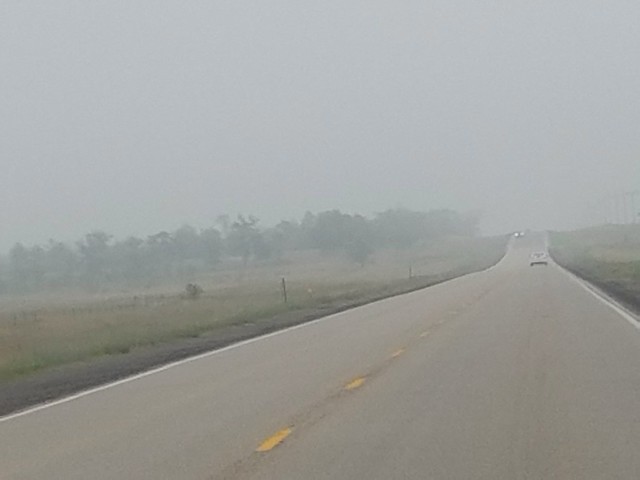 Under bluer skies equipped with our eclipse glasses: 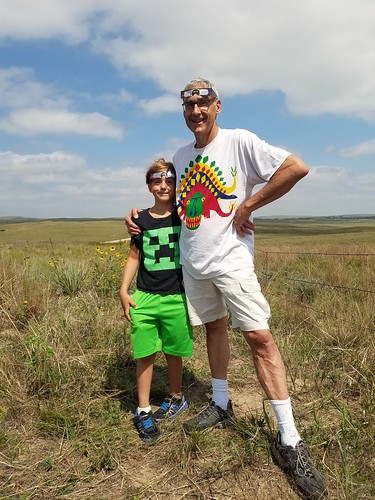 Totality (as recorded by a cell phone) with clouds obscuring the stars and planets: 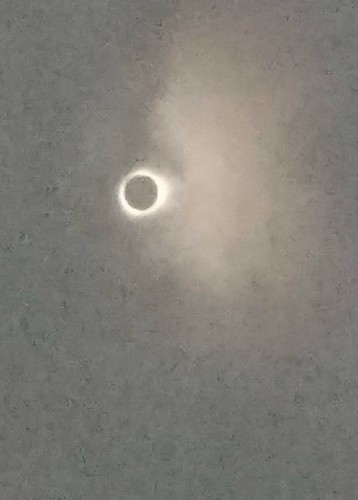 The two minute night under the moon’s shadow: 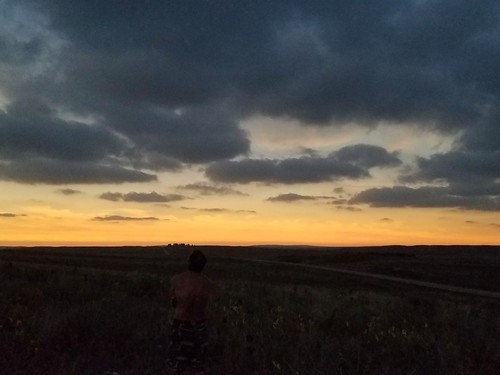 My partner recording the eclipse on his new cell phone: 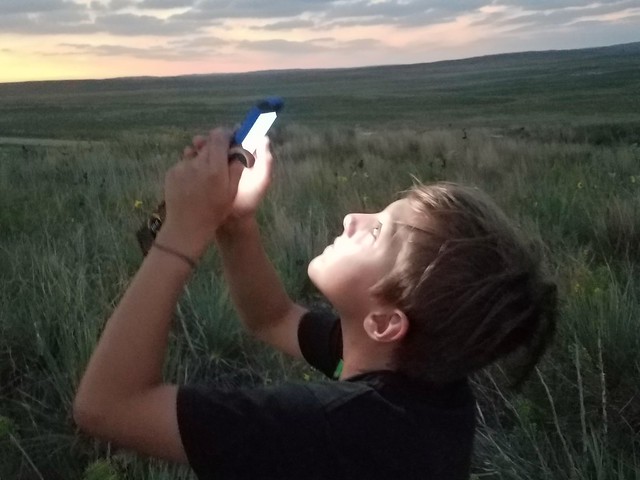 The Sandhills return to daylight as the moon retreats: 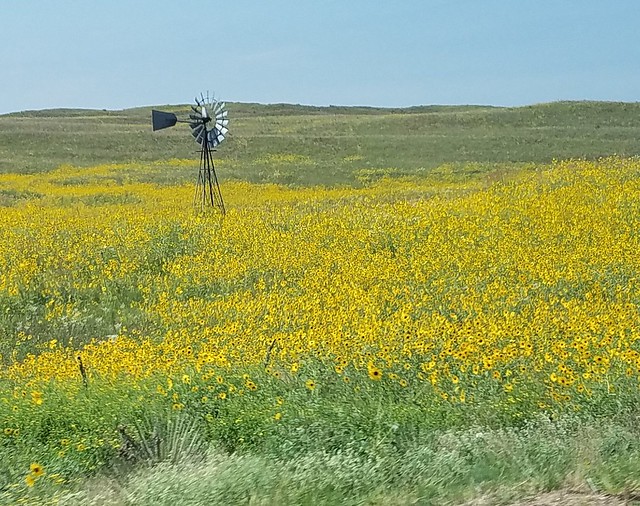