Finding myself denied the chance to send out greetings to Facebook left me with some pent up frustration. As my eight loyal readers know all too well, I hate being shut up.

So, I have put a second video “scrapbook” on Facebook of Days three and four. To my chagrin the video ends with this photograph in which my head is cut off. How very Chinese of Facebook. 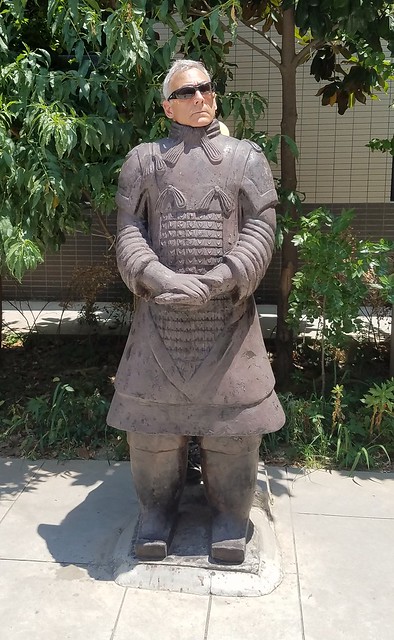 Remember this picture when you see the last headless frame in the video.

This trip became more personal for me shortly after we visited the Great Wall. On our way back to Beijing we were taken to the “Ming Tombs.”

The Mings were the last indigenous Han Chinese to rule before the Manchu from north of the Great Wall invaded and reinvented themselves as the Ching Dynasty shortly after the English settlement of North America. Only after I entered the path with columns of paired animals to greet deceased emperors did I realize I was walking where my parents had stepped 35 years before on my Father’s sabbatical tour of the Pacific. If you look on the left column of the quilt my Mother made to remember her travels you will see the standing camels from the Ming Tombs. Claudia and I posed by one of the resting camels just past the standing camels which you can see on Mom’s quilt. 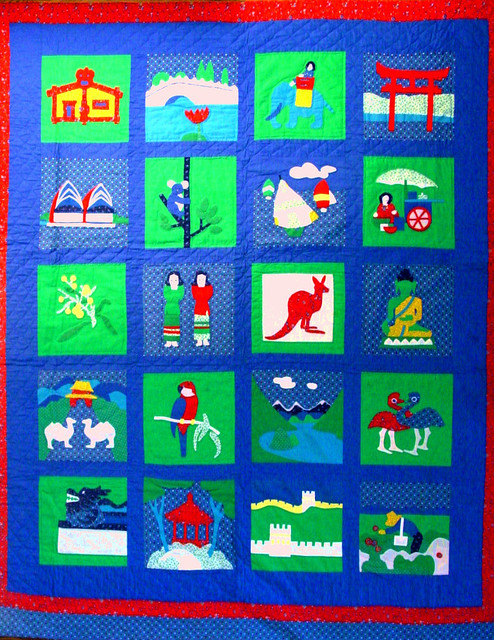 You may also have noticed the picture on the sign showing Mao tse-Tung and three comrades standing by one of the elephants. I took the occasion to pose by an elephant too although in a little more whimsical pose.

Our guide pointed out chips and cracks in the great statues that were inflicted on them during the Cultural Revolution when Mao’s youthful, know-nothing fanatics went about the nation burning and obliterating every object of ancient Chinese cultural veneration just like ISIS and the Taliban have done or like President Trump’s supporters are doing now to the “small D” democratic traditions of America.

The statues had been repaired by the time my parents visited and were there to greet me too. I can almost forgive the Chinese Communists for trying to tamp down the sometimes chaotic Democratic impulse. They are the latest dynasty, albeit an oligarchical one without a living emperor. Their emperor lies under glass an ancestor who’s picture is hung up to loom over Tienanmen Square.

type in “Mao under glass” and you will find a you-tube explanation that, along with all other YouTube offerings, is blocked in China.

In case Tiananmen Square is too remote from rural China Mao also finds himself on all denominations of bank notes.