On my birthday tomorrow I’ll take my grandsons on a Christmas Tree hunt. Claudia told the boys the other day that we would go out and “catch them” and to bring their nets.

“Can they fly?” the Tan Man asked. Claudia said, “maybe.” Tanner then asked if he could shoot them. I just told that to my Aunt Mary and she found it amusing.

Aunt Mary is my Father’s sister, the youngest of his siblings. She knew he was germophobic so, to insure that he left her softdrinks alone after she opened them, she would call “Look Dan.” After catching his attention she would run her tongue around her coke bottle tops before putting them unfinished back into the refrigerator.

Mary called me today as she has each December for a couple decades to wish me a Happy Birthday. In memory of her first sobriquet for me she always asks, “Is Treensie there?” I always respond with my deepest basso profundo “This is Treensie!” Its guaranteed to make her laugh.

She was very interested in my recent trip to Topeka, her old stomping grounds, and my investigations which included the Welty side of my family – her side. I mentioned stopping at libraries all over including one in Kansas City, Missouri, where I found a copy of my Dad’s high school annual with my Dad wearing an ROTC uniform looking very serious. (he is bottom-center in this photo) 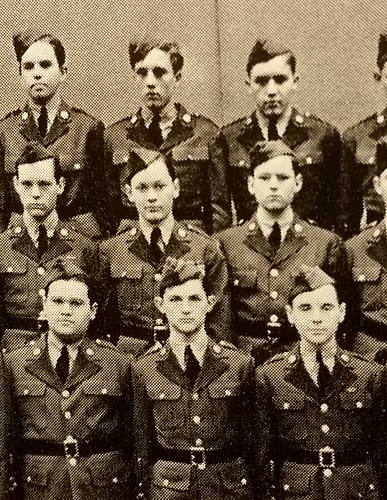 I mentioned to Aunt Mary that he was a bit of a goody-two-shoes and how, after reading all my Grandfather’s letters, I’d come to understand why his earnestness didn’t always go over so well with his father-in-law. I added that my Mother told me once she thought her father would have preferred it if she had married younger brother, Frank, who always caused so such mischief.

Mary told me that she didn’t know what exactly had precipitated it but that Dad had told her about a conversation he’d had with George Robb. It was about what to do if a robber held them up. Dad explained that he would certainly hand his money over to the villain. My Grandfather, the war hero, was dumbstruck. Of course, he wouldn’t have surrendered his money. The good people of Kansas didn’t know how well the State Auditor guarded their tax revenues. My pragmatic father probably never regained George Robb’s full esteem after that.