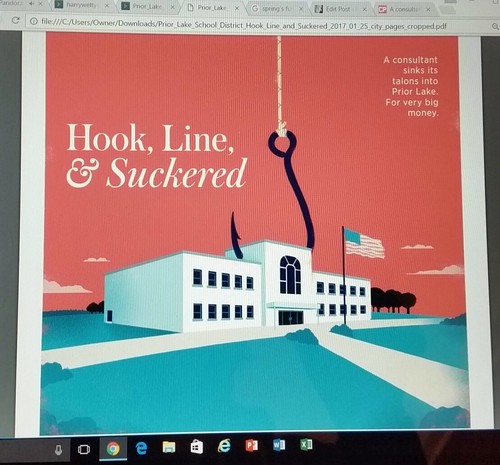 From this month’s City Pages: A consultant sinks its talons into Prior Lake schools for very big money:

…….The business of public education has spawned a specialized kind of vendor. They’re called construction services managers. They serve as consultants, assessing facilities operations and planning for future needs.

But these companies don’t just consult. They parlay their expertise into managing the very work they say is needed, providing incentive for them to urge as much building as possible. They oversee refurbishments and new construction from planning to completion, collecting fees with each move.

Wold would later earn Wayzata’s architectural and engineering work, but the firm had to reapply for that job. Kraus-Anderson would score the construction manager contract.

School board member Melissa Enger has often stood alone in questioning the wisdom of the district’s contract with Nexus Solutions.

By contrast, Prior Lake seemed to do as little as possible to protect its money.

Instead of putting out a public request for consulting proposals, the district used word-of-mouth, admits business director Julie Cink.

ICS Consulting of Blaine had other public school clients, including Shakopee, Fairmont, and Pequot Lakes. It offered to evaluate Prior Lake for a lump sum not to exceed $19,000.

The company also proposed to take on the role of “program manager,” overseeing everything from engineering to construction. It again pitched a lump fee based on the total budget, which would later be estimated to fall somewhere between $3 and $5 million.

There are advantages to having one firm handle both roles. The upside is cohesion from start to finish. But the risk is an incentive to increase costs.

Nexus wasn’t officially a company in the spring of 2012. It wouldn’t register with the Minnesota Secretary of State until June.

Its principals, Michael David and Brent Jones, had parted ways with their longtime employer, Johnson Controls, where they amassed decades of experience in energy use and facilities management. They’d been part of Johnson’s team overseeing Duluth’s ambitious school plan.

By all accounts, the $315 million project on the North Shore was a show. Duluth needed to slim its existing buildings, renovate others, and build anew. The result, according to projections, would be stable financial footing by way of $122 million in savings over 18 years.

Johnson’s promises of savings fell woefully short. They were compounded by budget overruns, increased fees, and money for unbudgeted expenses like temporary heating and additional personnel.

What was originally a $296 million plan ballooned by $19 million.

But Duluth’s pain proved Johnson’s gain. According to the district’s director of business services, Johnson received almost $57 million for its work — with nearly $45 million coming in various fees.

“Our schools were supposed to be in good shape for decades, is how it was presented by Johnson Controls and the people supporting the plan,” says Sharla Gardner, a former Duluth city councilwoman.

“If it was possible to do again, I know there’s no way, no way at all, the community would choose the same. The new buildings are nice, I will say that. But at what cost? It hasn’t been worth the dollars or the harm it’s done.”

Duluth’s lessons would be lost 220 miles to the south.

No one seems willing to say how Nexus discovered Prior Lake, or vice versa. What is known is that Nexus pitched itself as the total package. For $95,000, the company would assess Prior Lake’s needs.

The bid came in at $76,000 more than ICS’. It also came with the “understanding” that Nexus would also be contracted “for all professional services required to implement this work.”

In other words, ICS had offered a $19,000 first date. Nexus was proposing a multimillion-dollar marriage, with a lot more strings attached.

Compare these with what Wayzata schools paid. In 2014, voters approved a $109 million building and technology funding referendum. According to Finance Director Jim Westrum, Wold Architects and Engineers fixed fees averaged out to be about 6.5 percent. Kraus-Anderson, the construction services manager, earned slightly more than 2 percent. It also agreed to a cap “for site services and fees” that wouldn’t “exceed $2,120,205.”