Last January I took this photo at dusk of the hillside cemetery facing Jerusalem’s Eastern or “Golden” gate. 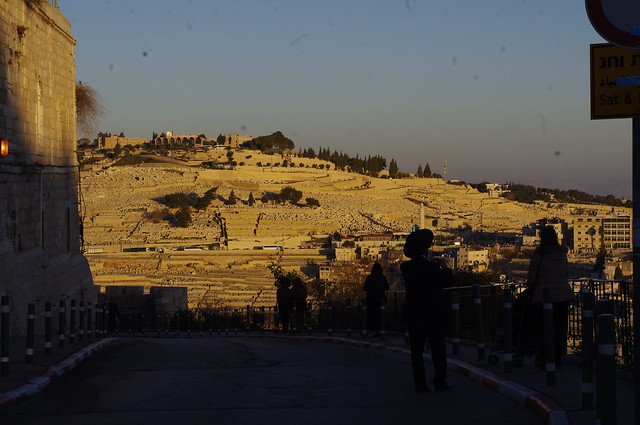 I recall hearing it is the resting place of over 100,000 Jews. They have been interred with their feet facing the Eastern Wall so that on the Day when a David returns to resurrect Israel the dead will be able to rise from their graves into a sitting position and be the first to witness the holy miracle as the sun shines on the Golden Gate. Or something of this sort.

I took the picture after stepping outside the walls of Jerusalem which you can see on the immediate left. The wall blocks the view of the road Jesus traveled on Palm Sunday to enter Jerusalem. The Eastern Gate has been sealed up for centuries and Christian believers say it was done so by Saladin to prevent the savior from returning and making ancient prophecies come true. Here’s Wikipedia’s history of the gate.

President Donald Trump is quite likely to bring the rapture about sooner as his Kapo hating proposed ambassador to Israel wants to buck decades of American foreign policy and move the American Embassy from Tel Aviv to Jerusalem. This will also be a great triumph for Bibi Netanyahu just as the election of Donald Trump has been a great triumph of Russian espionage and old, white, male, Moral Majoritarian fear mongering.

I just finished reading the Book of Ezekial last night leaving me about 90 densely worded pages of the traditional protestant Old Testament to read. This was where I ran across the prediction about the significance of the Eastern Gate.

To my contemporary ears the preceding prophecy in Ezekial 37 sounds more like the outline of a George Romero movie script.

From the NIV which end-of-timers will turn up their noses to in favor of the KJV.

4Then he said to me, “Prophesy to these bones and say to them, ‘Dry bones, hear the word of the Lord! 5This is what the Sovereign Lord says to these bones: I will make breatha enter you, and you will come to life. 6I will attach tendons to you and make flesh come upon you and cover you with skin; I will put breath in you, and you will come to life. Then you will know that I am the Lord.’?”

7So I prophesied as I was commanded. And as I was prophesying, there was a noise, a rattling sound, and the bones came together, bone to bone. 8I looked, and tendons and flesh appeared on them and skin covered them, but there was no breath in them.

9Then he said to me, “Prophesy to the breath; prophesy, son of man, and say to it, ‘This is what the Sovereign Lord says: Come, breath, from the four winds and breathe into these slain, that they may live.’?” 10So I prophesied as he commanded me, and breath entered them; they came to life and stood up on their feet—a vast army.

Thinking in terms of movie metaphors is lazy thinking but hard to resist. I expect to see the ancient Jews arising from their graves any minute now and a lot of empty street clothes lying hither and thither on the sidewalks as their apocalyptic owners are called to God.