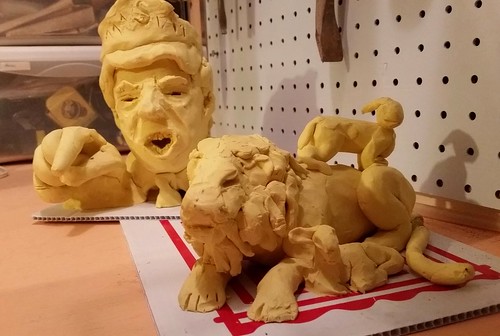 As I was putting Christmas decorations away I got a gander at my two models for last year’s snow sculptures. The subjects bookended my year although the one in back (of Donald Trump wearing a tiara for his victory in South Carolina) followed me like a ghost all year until he turned out to be all too alive in November. He finds himself the Rodney Dangerfield of Presidents and he’s tweeting up a peevish storm about the many slights he’s enduring. Reminds me of something we baby boomers said all the time when we were wearing our coonskin caps. “He can dish it out but he can’t take it.” I’ll cut him some slack when he goes a week without sticking the finger on his tiny hand down my throat.

On New Year’s Eve we practiced what Grandma Welty said was a Russian New Year’s tradition. We wrote a wish on a tiny scrap of paper incinerated it and poured the ashes into a drink and downed it. We toasted the new year with carbonated juice. I’m not sure if we were supposed to keep the wish secret but since I don’t believe in wishes I don’t mind telling my eight loyal readers that I wished that American’s would find some common ground in the New Year. The next morning’s Editorial Page had a cartoon with a wish for Common Ground for the New Year. Chastened minds think alike.

Ironically a lot of Trump’s voters find him as unappetizing as I do. I guess that’s some early common ground. It will be hard for me to separate the man from the office of the Presidency. We got a lecture about respecting the office at last month’s four-hour meeting marathon. An old acquaintance of mine from my Republican days shed some light on the anti-Trump picture inserted in an East High trophy case. 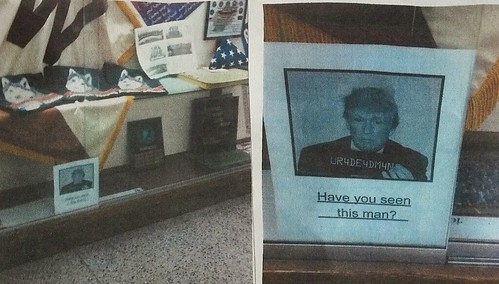 As you can see it was slipped between two overlapping glass panels. I found it just now on a site that posts celebrity mugshots. I presume it was a faked photograph. The site also had a disheveled likeness of her Majesty, Queen Elizabeth, holding up a similar sign.

Mr. Eckert was not satisfied with our District’s response which was more of a non response. We were a tad more subdued on this outrage than on some racist graffiti scrawled on a Denfeld bathroom wall.

Mr. Eckert said the matter had been taken up with the Duluth Police and the Secret Service. The latter explained that the sign, which suggests that the holder of the sign is a “dead man,” was a threat which should be taken seriously. I suspect they took Trump’s “joke” seriously too when he hinted around that a supporter of the Second Amendment might short circuit the election by taking Hilary Clinton out. Oh, to have such a jokester in the Oval Office.

Of course, lots of Republicans would much prefer to have Vice President Pence in the Oval Office. I’m not sure I share that common ground but it springs from a similar distaste. We may all soon discover what we have to lose which was as close to a coherent reason to gamble on Trump as anything else the candidate offered.

Mr. Eckert suggested that we check our hallway security videotapes to see if they showed teachers strolling the halls and treating the threatening poster as a joke. That would be an interesting way to ring out the old year. Another helping of paranoia please?