I have a modest civic responsibility – to do my best for the ISD 709 schools. When I moved to town in 1974 I had larger ambitions to make my way in the world of politics. When local political experts suggested I start by running for the Duluth School Board I politely demurred outside and scoffed on the inside. I had no idea that my life would turn those ambitions on their heads. Today I fear a terrible decade or two lie ahead for the Duluth Schools. I’ve been despairing of a means to stave off the worst. I fear that the wrong blog entry may hasten disaster. For that reason I will write a metaphor, of sorts, instead – about the books I’m currently reading. 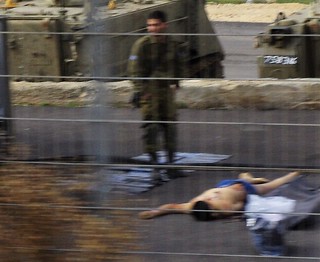 I mentioned in one of the last blog posts that I snapped a photo while in Israel that I only looked at closely a few days after returning home to Duluth. In it I found a Palestinian shot dead not an hour before lying at the feet of an Israeli soldier. I believe I’ve mentioned several times on this blog that this trip was intended to study peace making efforts in Israel.

One result of that peace trip is my current attempt to fulfill one of the few items I’ve always had on a bucket list – reading the Bible from cover to cover. About a month ago I started where I left off a quarter century ago at the Book of Numbers. Its the fourth book of the Jewish Torah. I read just before bed as much as I can stand before my eyes glaze over. Its usually only a chapter or two. I’ve downed three books so far having finished Joshua last night. Like Numbers and Deuteronomy its a tough slog. At 65 I feel like I’m finally ready to read the Bible and make sense of it. God knows, if there really is a God, that I’ve been reading up all my life on the history, geography and theology of the Christian Faith. And now I’ve been to Israel. Granted, it looks a little different at the beginning of the 21st Century than it looked over 2,000 years ago when Jesus began collecting disciples but the topography and climate haven’t changed.

Deuteronomy reinforced and deepened my understanding for the dead Palestinian who I caught on camera. Here’s how the ancestors of the Jews, so many of whom would later go sheep-like to the charnel house of the Holocaust, dealt with the residents of the land God promised their forbear Abraham. From Chapter 3 verses 3-7:

3 So the LORD our God also gave into our hands Og king of Bashan and all his army. We struck them down, leaving no survivors. 4 At that time we took all his cities. There was not one of the sixty cities that we did not take from them—the whole region of Argob, Og’s kingdom in Bashan. 5 All these cities were fortified with high walls and with gates and bars, and there were also a great many unwalled villages. 6 We completely destroyed them, as we had done with Sihon king of Heshbon, destroying every city—men, women and children. 7 But all the livestock and the plunder from their cities we carried off for ourselves.

King Og of Bashan didn’t fare well and, unless the boasts of Deuteronomy are metaphoric themselves, the Hebrews under Joshua did not leave a single human survivor in the sixty cities and uncounted villages of Bashan. I just read a book about the coming to power of a man who tried to be that thorough himself, only with the Jews.

I had been planning another winter trip for almost as long as I looked forward to my peace studies class in Israel. A small Missouri University engaged the foremost historian of World War One’s 369th US Infantry to research and give a speech about my Grandfather at the National World War I Museum. The Division was composed of black soldiers and tiny Park University wanted to honor its alumni, George Seanor Robb, my Grandfather. He was one of two Kansans who were awarded the Congressional Medal of Honor for that war. In case you were wondering my Grandfather was white and an officer.

While I visited the National World War One Museum in nearby Kansas City I bought a book for a memento. It was an anti-war book written in the Isolationist aftermath of the Great War. It’s Three Soldiers by John Dos Passos.

I began reading this to Claudia a few weeks back but owing to the direction we knew it would go and Dos Passos’s literary style we set it aside. I plan to read it now in tandem with the John Hershey Book which is delightful and very Frank Capraesque. The Dos Passos novel, like ALL QUIET ON THE WESTERN FRONT, by Erich Maria Remarque, is a warning against war that my Grandfather took to heart, after he was awarded the MOH. He never forgave Woodrow Wilson for tricking him into voting for him, a Democrat, for President on the promise to keep America out of a war we had no business fighting in. I doubt if he read the Dos Passos book. He generally read histories and there was nothing about war he could learn from Dos Passos. 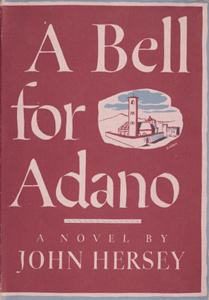 I can’t say I’m looking forward to continuing this war story. But what a wonderful optimistic book Hershey’s A BELL FOR ADONO is proving to be. Its supposed to be a four hour read but that’s not by reading out loud as I am to Claudia. Everything America was to become (minus Jim Crow and lynching) bursts out from its pages. Oh, it has one dark presence, General Patton. And even Patton’s appearance, albeit under a different name, is a wonder. The book, written in the second to last year of World War II, is a paean to Democracy, one that Americans ought to be reading now during this tumultuous, cynical Presidential election. It was being read by Americans while the war raged. Even its outing of Patton, so thinly veiled that no one back home could have had any doubt to whom Hershey was referring, is a testament to America’s freedom from censorship. It demonstrates how Americans practice pure, simple honesty even during the darkest of times.

So there you are. That’s my reading list for the moment. That’s what’s on my mind. Nothing less than War and Peace and the future of one small city’s public school system.