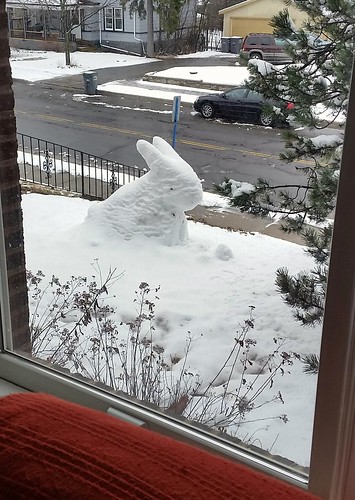 My bunny Max looked more like the leaning tower after a week in the sun. He wasn’t so big that a roll down the hill would have taken out a car but we got a dose of snow Saturday morning that I thought could be used to reanimate him. I got my son-in-law and a Grandson out and we attempted to push Max upright. Poor Max only broke into snowy chunks. Rather than leave him in a pile we quickly turned him into a much less imposing generic bunny.

For the past couple weeks of this Blog’s rebirth I’ve stuck to School Board issues which is far too narrow focus for my liking. Here’s some other stuff buzzing around my head.

I started this post out with one of my favorite “slogans” for any elected official “Just because you are paranoid doesn’t mean that people aren’t out to get you.” A former School Board member handed that off to me twenty years ago after my first election to the Board. I see I’ve quoted it at least a half a dozen previous times in other blog posts. What brings this to mind is the news that greeted me when I woke up. After withdrawing a demand to have a Monday meeting to take public comment I discovered in the Trib’s editorial page that rather than tonight being a school board meeting it had become a League of Women Voter’s meeting. I was not happy to have this done without my consultation. I phoned our Chair and pointed out that one of the League’s biggest wheels voted to censure me and Art Johnston last year. The League has other people who I’m pretty sure take a dim view of me including another former Board member who wrote an extremely critical letter to the Trib about me last year.

I further told our chair that unlike forty years ago when I found myself in Duluth the League no longer has the nonpartisan cast of old when it was generally composed of both Democrats and Republicans. That was true from the 1950’s through the Reagan years in the 1980’s but the organization would be hard pressed to show membership drawn from both parties today. Although I switched to DFL caucuses for about four elections in the last decade I’ve never gotten over the sense that I can be trusted by DFL regulars. Today I’m a man without a party and the idea of an organization loaded with my critics gives me pause. This was supposed to be a School Board meeting. For now I can only wait and see what takes place.

I am not alone in my paranoia. I got this email this morning:

The DNT and AH letter seem to be setting the table for a NO to Edison.

Rather than assume a “stick it to Edison” stance the board should do what is necessary to save the district. Students are leaving and more will leave if 709 needs to make further deep cuts. No referendums will pass if 709 fails to pass the policy change needed to sell to Edison. Reduce, reuse, recycling Central is the only sound environmental decision.

This is the best deal they will ever receive since a private developer will need to make millions of dollar of changes so that limits what they can offer.
Dixon used to say he would sleep better if Central was sold. The financial proposal submitted to MDE (MN Dept of Education) to get the RP approved was the most convoluted they had ever seen. Savings and sale of buildings were to pay off the new facilities. Now is the time to make good on that promise to the citizens of Duluth.

This morning I took up Edison’s offer of a tour which was emailed to all School Board members. I joined Art Johnston. Alanna Oswald will take one later. The other four Board members have yet to take up the offer. One question that has been raised by skeptics who think the offer is a ruse to cover up Edison’s failure to get an OK on building on Snowflake was answered. In a week or so they will take a Review and Comment to the Minnesota Dept. of Education to get the OK on starting the Snowflake building.

I was upset enough this afternoon that I asked Claudia to let me read a couple chapters from the book I started reading her a couple days ago, “In the Garden of the Beasts”. I’ve whipped through a third of it in just a few days.

Its familiar territory for me because I’ve read a half dozen books about Hitler and times. In 1993 I read 1933 by Philip Metcalfe about the same subject. I know the date because I keep track of my serious reading here. As good as that book was this one by Erik Larson a superb history teller. The passage I read just now was about a veiled speech given to Business leaders of Germany by the American Ambassador giving examples of men not unlike Hitler and the damage they brought down on their nations. It put me in mind of Donald Trump’s Republicans and Keith Dixon’s Red Planners. Both men have had a lot of folks sitting on their thumbs.

On Good Friday I both sang at an ecumenical church service and read from a script about the events of the first Good Friday. Our recently retired Chair was there. Neither of us acknowledged each other. I say that with no great sense of shame or pride. We humans are infinitely fallible.

As I read the script for the service which was lit only by candlelight I spoke the names Gethsemane and Mount of Olives. For the first time since my recent visit to Israel I got a little chill. I pictured the places I had stood two months before when I read their names out loud. They were suddenly real to me. I saw them on a mission to study peace – peace I am having a hard time ushering in to the beleaguered Duluth Schools. I’ve told many people who asked that this trip to Israel was astonishing. I hope I can make time to write about it. It has lessons for me here back in Duluth. The starkest lesson was that peace is hard. I discovered that after I returned home and looked at the pictures I took from a bus as it passed Israeli guard posts. In one of them I discovered something I had not noticed when snapping a hasty picture. It was the corpse of a young Palestinian man shot dead and lying at the feet of a soldier was waiting for my camera to take’s its last picture.

I apologize, I haven’t proof read or edited this post. I’m not sure if I’ll find time to do it.