This document shows that the School Board intended to borrow an additional $90 million in 2011. Now, to avoid the election of a school board hostile to the Red Plan Dr. Dixon has announced that the borrowing will take place next year in 2009 before a new board can be elected. That’s not his excuse, of course. His Business Director, Bill Hanson claims that the reason for moving the borrowing (and attendant taxes) up is because bond rates are so favorable now. 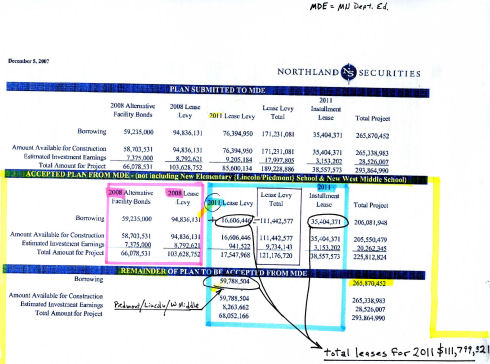 For a full size image check out the Let Duluth Vote site: here

The document above has been color coded by Let Duluth Vote so that you can see when the borrowing was originally planned. 2008 borrowing is in the pink border. 2011 borrowing is surrounded by the blue box but will now be pushed up to 2009. I suspect that this bonding was originally postponed to make a taxpayer backlash less likely but now the current Board will feel the full fury of a Red Plan tax revolt. In fact, the 2011 borrowing was so well hidden that even Nancy Nilsen, the Chair of the School Board, was unaware that further borrowing for the Red Plan would be necessary.