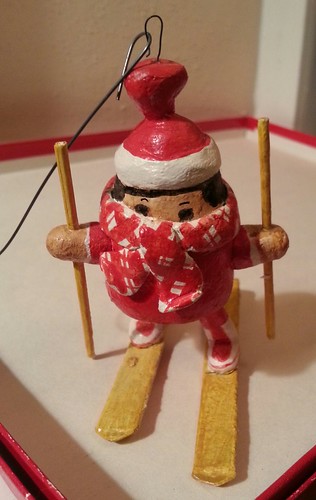 My Mother’s inspiration for this ornament was the daughter of one of her friends and fellow Harpies, as the co-owners of her boutique called themselves. I was looking for a bird ornament because of the nature of today’s first post but the loon with a stocking cap is one our children painted when she gave them a craft project to do so its not quite authentic.

I was going to write about my visit with Art Johnston at his house the other day. Like Gary Glass who lived a short walk in East Duluth from his work at the Federal Water Lab, Art worked a short walk in West Duluth from the old Riverside School where the Federal Forest Service has its office. Art is an avid skier and a sail boater and it always seems I call his phone when he’s out on the bay or shushing along the railroad tracks that lie near his home. The wind is often as bad as the static from the dead spots when we talk.

There are a lot of things about Art the public doesn’t know so I was pleased yesterday when Loren Martell listed them in a long paragraph in his most recent column in the Reader. Because of the Holiday I won’t link to Mr. Martell’s column but I will steal his paragraph:

Really? It was reasonable to fear that Art Johnston a respected, educated citizen, a retired engineer and five-year member of the school board, someone civic-minded enough to be a Denfeld High music booster and log several hours reading to second graders at Laura MacArthur Elementary school, someone who is a volunteer driver for Meals on Wheels and a donor to both Woodland Hills Academy for troubled youth and First Witness, an organization dedicated to preventing child abuse, someone who has a Coast Guard pilot’s license and teaches adult education courses in celestial navigation, someone who is a member of the NAACP and a member of the district seven DFL Executive Board, someone who has passed the very stringent background check for security clearance for a TWIC card (established after 9/11) for someone entering a site of potential terrorism (the Duluth harbor, as a Coast Guard pilot, for example) and also recently passed another rigorous background check through an application process as a foster parent, someone with a resume few others in this town can match.

My parents did some birding when I was young. I remember their delight at spotting a scarlet tanager when I was a kid out on one of their forays. I have an old Roger Torrey Peterson Guide myself from a few forays Claudia and I did in our years together. I fondly recall the time twenty years ago as a chaperon on a week-long church mission trip to help fix up poor folks houses in Trinidad, Colorado when I noticed a group of scissor tailed flycatchers fitting about. I dragged my daughter over to get a look at them. I hadn’t seen one since living in Kansas twenty years before that.

Sitting in Art’s dining room looking over at his feeders I saw some interesting birds which wasn’t surprising due to the forested nature of his property. At one point I stopped a discussion on a fine point of the law to exclaim, “what’s that? A warbler?”

“It’s probably a pine sisken” he called back before looking over his shoulder. Nope it was a warbler something I’ve never seen at feeder, let alone at this late point in our winter season. As it flew off I could clearly see the yellow mark on its rump. “Its a Myrtle Warbler,” I shouted. “Its a butter butt! Art shouted back.

Art explained that twenty years ago birders rechristened Myrtles “yellow rumped Warblers.” He added that at Bird Counts his buddies called them “Butter Butts” a far more memorable sobriquet. We spent half an hour looking out at the birds that were flying too and from his feeder. He offered me one of his binoculars which I declined because those fine points of the law were waiting and because I’d promised to get back home to play a game of Risk with Claudia and the Tan Man who still had that persistent fever.

Art pestered me to join him today in the annual Christmas Bird Count but I declined the offer several times. My son is coming home today, I’ve got a truck load of papers strewn all over my office to clean up and remove the dust bunnies from. Settling my Mother’s estate requires some foot work. We are late with our Christmas Shopping. The list goes on and on. But that’s what Art and his “friend” will be doing today. I wish them a long count.