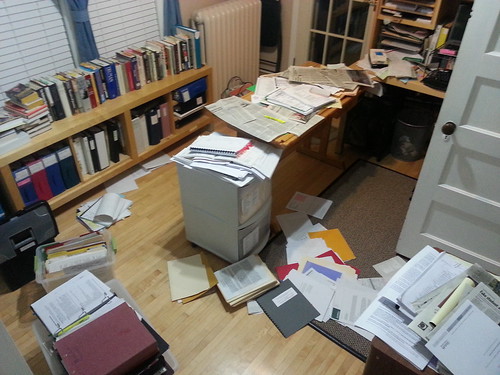 All that paper clutter lies behind me as I type this. I have, as I’ve indicated before, a flood of posts awaiting the lifting of the floodgates. I’m keeping them pent up. Long time readers will recall that I’ve said my family would come first from now on to all of my other obsessions, writing, history, the falling of the Duluth School District into a black hole.

Tonight I did attend the end of year fete by the District to honor retiring staff. I had a lovely time that I’d like to elaborate on but won’t because, as the title says, I’ve got a wedding on my mind. Just one anecdote. I saw the principal of Congdong Elementary sitting at the table with a couple from my church. I had gotten a call from the principal a couple days ago responding to a call I’d made a week earlier asking if I might get a tour of the new school. I hadn’t called her back so I wanted to explain that I’ve been preoccupied with wedding preparations. To which the couple from my church teased me mercilessly about using my daughter’s wedding as an excuse. I enjoyed the teasing. The principal graciously accepted my excuse and I said I might drop by for a tour after school was out because I was sure she’d be in the building long after the kids and teachers were gone.

About that godawful mess behind me. After I’ve completed this and the following post I will dump it on the queen bed in another room for sorting and filing later tonight or tomorrow morning before my brother flies into town. Its a two day job but I’ll give it a couple hours which will make the job of organizing it all just that much tougher when I finally go through it methodically. It hasn’t helped that my damned cat has knocked the somewhat orderly stacks of papers on my table on the floor a couple of times after I failed to feed it on its schedule.

What I will try to do before company comes tomorrow is respond to forty emails that have come my way over the past weeks especially since the DNT made it clear how damaged the course offerings are at Denfeld High School…….anyone remember my heinous comment about gangrene spreading through west Duluth during the campaign?

My job is to try to prevent an amputation. Its not going to be easy with the MASH unit I got elected to. That leads me to Post 2 for the evening.