In the last week I’ve been thinking a lot about cartoons. Over the years I’ve wished that I could be a political cartoonist. I’ve bought 15 or 20 cartoon anthologies of cartoonists work that I admired over the years.

What got me on my latest kick was one of the reruns of Charles Schultz’s Peanuts D-Day cartoons (June 6):

Willie and Joe were favorites of American GIs during World War ll. They were battered “dogfaces” who nonchalantly offered wry commentary on every grubby gritty thing they endured. Its said that General Patton loathed them and wanted them removed from the military’s Stars and Stripes publication because they were such slouches. Servicemen who served in combat begged to differ.

Then last week I read something that piqued my interest in the Reader Weekly. It was a glowing review of a republication of one particular artist Donald Duck artist’s, Charles Barks, comic books. This was to be Volume One a series which was a little before my time. Evidently it was beloved and although the artist was anonymous at the time his work was of such merit that in later years others made sure to give him his due.

As a consequence of my reading the article and my enjoyment of reading to my grandsons I looked the book up on Amazon which was running a sale. I got it for only fourteen bucks. Not bad for a full color, 240 page book. The reviews on Amazon were glowing as well.

Then I got thinking I’d kind of like to have the complete set of Willie and Joe cartoons and I found them and ordered them as well.

A couple years ago in New Mexico, I think, I got a used paper back book by the creator of Willie and Joe, Bill Mauldin. I’ve never finished the book although the first chapter was a hoot and very improbable. It began with Mauldin recalling a childhood incident where he stole the cigarettes of an old Mexican woman cook and having to run into a river to escape her wrath when she realized what he had done.

When I located the Willie and Joe anthology on Amazon I took a moment to read some of the background info on Mauldin and discovered that he had a remarkable background growing up in New Mexico as a bit of an outcast. I ordered the book.

Then last night I stayed up till midnight watching an old movie that I thought I’d heard of before called “The life and death of Colonel Blimp.” It was very long but also quite good and it puzzled me thoroughly because at no time during the movie did any Colonel Blimp appear. Neither did he die. There are a lot of sites to be found on it by Googling and you can see at least the beginning of it on You Tube.

It turns out that Blimp was such a well known character that there was no particular need to explain to the movie going audience of its era 1943 what the point of the movie was. It was based on a cartoonist so famous that like a few others he dropped his first name and just went by one name, his last, “Low.” 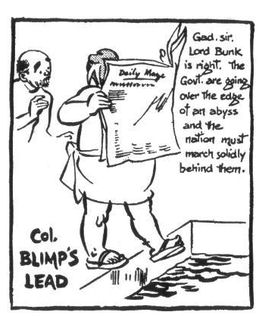 I expected that a Blimp character would end up looking foolish in the movie and was surprised to see just how sympathetic he was shown to be. Still, apparently the movie makers depiction of a German friend of the Blimpish character so irritated Winston Churchill that he prevented the movie from being seen overseas during the war. Too bad because it was great subtle propaganda for the Allied side without being crudely Anti-German.

I was surprised that like Bill Mauldin Low got his start far away from the main stream having learned cartooning on his own like Mauldin but in New Zealand’s South Island instead of New Mexico. He got his start in Christchurch which we missed last March because of the devastating Earth Quake.

By the way. Even Donald Duck took part in World War II although not in a way that is remembered very fondly. The book I ordered is all post war stories of the Duck and his nephews having great adventures and domestic disputes. His days as a warrior were long over by then.

Oh, I really liked the way that “Low” described himself. Its the quote that head’s this post.