The entertainer, Al Franken, who wrote about the “entertainer” Rush Limbaugh calling him a big fat liar in his book title got elected to the US Senate. Meanwhile Rush and his ilk keep lying.

John McCain (a fellow with some experience with torture) makes it clear that the lie that torture got us Osama is just that – a lie. Rush and crew are still pedaling it.

Oops….the book is not titled Big Fat Liars. Its not far off though. 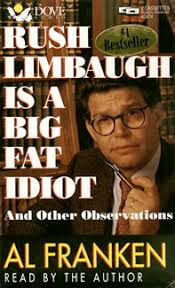