We walked over to the UCC church a few blocks away to cast our votes this morning and were joined by neighbors heading the same way. I put my I voted sticker on my carhart jacket next to my I like Ike button. It reminds me of friendly ghosts from my party’s past.

Bonjour ma amie…..(this is a note to my French Pen pal who noticed I’d recently added a few posts. Over a year ago she consulted them often to practice her English….anglais. ) Grim and Beat it is a comment on today’s election. Its from an old phrase “Grin and bear it” which urges people to take their troubles in stride with a smile. I’m so fearful the Republicans are goin to rejoice and Trump is going to take credit for the economy garroting the Democrats that I won’t be watching the returns tonight. My French pen pal says the French press is predicting a Republican victory. My view is that Republicans are in deep need of Penitence for their betrayal of our Democracy. Their plans to disrupt America and dig themselves and their democratic heresies will just make me dig my heals in deeper when I’d really just turn my attention to other less onerous distractions.

So I’ll share a couple of my Flickr photos that I’ve intended to use for posts as yet unwritten explaining things I’ve been thinking about recently. Here’s Herman the German standing atop the monument to help the New Ulm, Minnesotans feel better after some hard decades feeling dissed by the American No Nothing sentiments at the end of the 1800’s. We visited New Ulm in the Summer on our tour of the Minnesota River Valley. 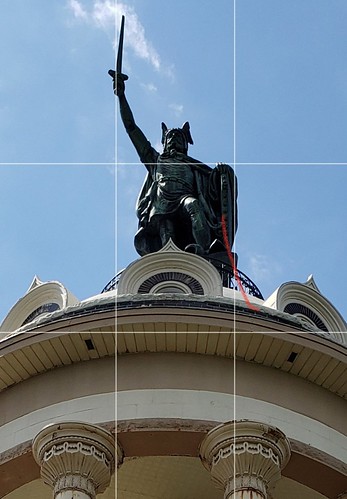 I read a review of its reprinting a few years ago and something prompted me to order it not long ago. It was written a year before Minnesota author and one-time Duluth resident, Sinclair Lewis published “It can’t happen here” in 1935. That book was about the possibility of a Nazi like take over of our Democracy. The Oppermans is about that happening in Germany from a Jewish families experience in real time. As I’ve read it I keep thinking how as a child I heard Americans, when talking about Hitler, How could the Germans have let this happen? or how could the Jews not seen what was happening? Lion (pronounced Leon) did see it and wrote this from exile a year after Hitler became Chancellor. It shows how it happened to one well to do Jewish family and, like other books it is a warning.

A 1934 New York Times book Review says of it: “…And so this novel is addressed to the German people, who will not be allowed to read it, urging them to open their eyes. And it is addressed to the world outside bearing the message, :Wake up! The barbarians are upon us.” I is a wake up call every bit as pertinent now as it was when it was made 88 years ago before the crematoriums were fired.

As for the photo of Herman. His name was Arminius and he led a failed rebellion against the Romans but remained ever afterward a symbol of German Nationalism. The French and English have such symbols too of chieftains who fought Roman conquest. And one of the seeds in The Oppermans is a precocious son who is forced to abandon a speech about liberal German heroes like Van Goethe to give one on this beloved figure of the Nazi’s. When he fails to give a ringing endorsement of old Herman all hell breaks loose for him while other pressures fall on his family. I’m still in the third section of the book having finished Yesterday. I’m half way through today and in thirty pages I begin Tomorrow which the last section which if it covers events in 1934 leaves a lot of other unhappy tomorrow’s yet to unfold. One thing the book does to exceedingly well is explain my childhood question how could this happen.

And because I’m running out of steam there is this photo from a book called The Gregg Reference Manual.

It explains the proper way to deal with periods of time. I got a stern reprimand from my tough editor about the way I talk about decades. 80’s, 1980’s etcetera. There is no apostrophe. So I found one of a couple old style manuals of mine to see more about my bad habit. It should be an easy fix for the future. I suppose I could still use it when a decade owned something like “1980’s music.” But not the music of the 1980s.

A year ago my editor got fed up with all of the local writers and told them not to use the “Oxford comma.” I’m not sure if that should be capitalized. I don’t use the oxford comma. I learned somewhere years ago that commas don’t go after “and” like in the end of a list. 1970s, 1980s, and 1990s……. When we got this directive I knew there was an Oxford comma but I didn’t remember what it was. Turns out I didn’t use them.

I am not very fussy about grammar but then I got good grammar drilled into me as a sophomore in high school with my 3200 series grammar books. My teacher hated to teach grammar preferring poetry, short stories and plays……(NOTE the absence of the Oxford in that list) My Mother was a little astonished upon moving to Minnesota to hear Minnesotans doing another verboten grammatical violation…..ending their sentences with a preposition. In this case it was “with.” I’m going with. Do you want to come with? The noun would not be hard to figure out in this context of a familiar conversation. My Mother thought it was a uniquely Minnesota affliction.

By the way that next piece of mine for the Reader is “We are the Meteor.” Its as APOCALYPTIC as they get. it fits in PERFECELTY with Grimming and bearing it.