The title above is one of several dozen I have in mind for a Reader Column. Its based on a very good friend who told me all the Republicans he knows think I’m very busy flipping the bird at them with all my criticisms of Republicans, Trumps etc. That’s not what I intend to do at all. I will remind my readers here – all eight of you – (I appear to have called them this in 175 posts to date) that I was called a worse mass murderer at a GOP convention than Mao, Adolph and Uncle Joe once. That’s a pretty big middle finger too.

So I don’t take the charge too seriously. If anything I imagine a Donald Trump is the man inspiring Americans to finger each other 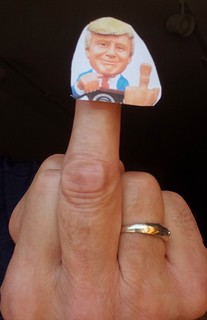 Call me a “mass murderer” I’m happy to take a picture like this and share it with you.

My concern about Trump predated the “Big Lie” that the election was stolen from him. My first snow sculpture of him was in 2016 when all the Republican know-it-alls assured themselves America wasn’t so stupid as to let Trump anywhere near the Republican nomination for President. But being a mass murderer I already knew what the Republican Party had done to remove independent thinkers with me too types like all Senator’s Cruz, Rubio and Graham. One of the few with cajones, John McCain, died early and President Trump grudgingly came to his funeral to see him off.

My next column which I guess is another middle finger is Trump’s Crime Spree. The Big Lie stuff only paper’s over his treason.

Today I’ve started organizing my many piles of unfinished campaign stuff on the assumption that I might be just about over with covid and I might just still have enough time in the next seven weeks to the election to help dump a Trump Crony from Congress. To that end I tried to look up an old story I thought I might have written about over the last 16 years on the blog about my first experiences with elections that Republicans were a little paranoid over from my youth. When I typed in precinct caucuses 1976 (my first year caucusing in Duluth) I found a couple interesting posts that had nothing to do with that year

There was this one about my last DFL precinct caucus in 2017. I used this post to list all the Democrats who left that party to become Republicans: The Elephant in the DFL Screening committee

And there was this post which includes a long ramble about what the Republican party once was: My Favorite Movie I just glanced at it now and I’m not even sure I mentioned a movie.

This morning I finished reading a wonderful book about the financing of the Civil War which explains as well as any other book I’ve read what Abe’s old Whig Party stood for. Its the third book I’ve finished in the last half of the summer and now another one beacons. I may not be able to dump Pete Stauber but at least I can share how far he’s fallen from what Republicans used to be. I shouldn’t need a middle finger to do that.