Claudia came down with similar symptoms yesterday and has taken two Covid tests. NADA. She’s currently in worse shape than me but before her fall she prudently stocked out house with instant meals. If I don’t test positive tomorrow I’ll still need to wear masks for a week lest others catch any contamination. That means that my continually deferred thought to kickstart a secondary campaign to help Jen Schultz on the UMD Campus is still born and in need of a slap on the butt. I can’t return to UMD and reprise my Dorm door to door with all the remaining campaign lit I still have until I’m sure I’m not a (health) menace. As for political menace…..I might not even be able to manage that……..But I will never forget saving a Republican legislature in 1972 on the Mankato State Campus with new voters curtesy of a constitutional change that Republicans of that era were fearful would slaughter Republicans.

I struggled to write my next column for the Reader on Saturday with a head slowly lifting out of the Covid fog. I haven’t reread it since I sent it in. Its called Bird (brains) of a Feather. I sent a photo of Trump and Putin shaking hands to advertise the foul subject. I’ve had to work very hard for the last couple of Reader articles because my head is everywhere at once. Birds was one of the hardest ever and not having looked at it for a couple days I’m concerned its a hash. The subject is too important for me to have done that to it.

When I haven’t been in a daze or scrambling to write a column I’ve been practicing French, which suddenly seems within my grasp, and reading Ways and Means which I mentioned before. It is so covered with my yellow marker it looks like a see through redacted FBI document removed from Mara Lago. Witness: 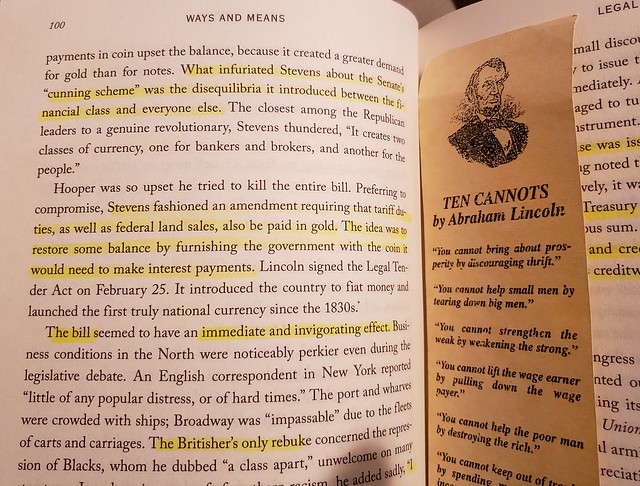 I’ve read a great many books on the Era but this economic treatment makes a new kind of political sense to me and I keep learning new facts and insights. For instance if I ever heard before that the North allowed the South to sell cotton after capturing the Mississippi down to New Orleans it didn’t stick in my head. To do so in hopes of reviving the Northern economy was an even greater surprise. This was all spelled out economically in chapter called Ways and Means which takes me almost midway to the finish of the book.

Ways and Means is the name of the critical Committee in the House of Representatives.

Yesterday’s reading reinforced how important the Whig Party’s policies were to the creation of today’s America before Lincoln’s Party evaporated. Its policies finally hurdled the political wall as those of the Republican party and laid the foundation to the America we know today. As I read it I was reminded page by page how the Dark forces of Thomas Jefferson’s hypocrisy have swarmed into the Party of Lincoln like the demons from Hell in ghostbusters. The gates of hell are ignorance, greedy Christian self regard and flat undead racism. Its gates were the South’s and its undead Dixiecrat Zombies.

I’m rather glad I have more time to soak up this book before I can decide whether to try to stir up some youthful outrage. The news is full of the destruction of the Earth these college students might like to preserve for any children they are thinking they might bring into the world.

…….I had to write something to be able to fall asleep… its an hour before midnight. Bonne nuit.