I had several other posts in mind along the lines of telling the truth but I will keep them to myself. Writng several posts even without bothering to proofread them made me happy. So, I’ll turn to some campaign related stuff before I move on.

Below you will see one of my stabs at financing a political campaign. Its a proof of one of 54 cards I ordered of my snow sculptures. The Joker will be me in a mask on Jabba the Hutt. 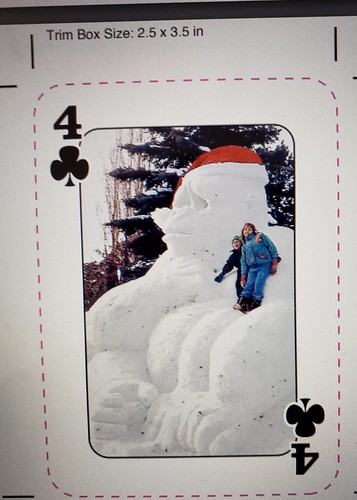 If I am unable to use them to raise a little money it will have become strictly a vanity project. A week ago to shave off $400 in expenses I decided not to round off the corners. You will see I changed my mind in the proof. If I’m going to print 200 decks of cards I want them to be playable.

Just sent me an email to have me set one aside for you…..harrywelty@charter.net You could “order” more than one.

Anything I raise will be used to demote a Congressional Trumplican to the mere status of citizen. And Pete if any of your people are monitoring this know that I plan on challenging you again in two years if you don’t confess that you were wrong to sign onto the attempt to cancel the votes of four Biden states. I’ll keep accepting contributions to get that message out even if you win in the GOP primary. As I keep telling folks……I take a very dim view of treason.