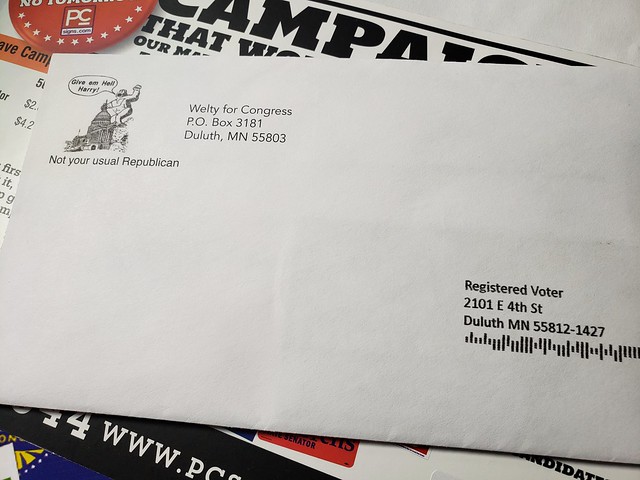 To my amazement and delight my first political bulk mailing arrived at my home the day after it went to the Post Office. I thought it would be Wednesday four days from now it would arrive. Not all of the 7,000 registered Republicans I mailed it to in East Duluth will get it today but what it means is that my first donations will begin arriving Wednesday what with the mail going to St. Paul first and then back to Duluth.

My letters are not like any I’ve ever received from traditional candidates which are almost always generic. I am particularly proud of the second page which people picking up next week’s Duluth Reader will find on my page 11. This time I will have to pay for the privelege and I hope the visitors from all around the nation will pick it up and take its contents home in their heads. Quite simply the message is that any Congressman, like ours, who has his fingers in his ears can only be reelected with the help of voters who are either ignorant, blind or Benedict Arnolds or perhaps some combination of all three.

I have never written anything so damning of an elected official as the simple oath of office that Pete Stauber swore to when he twice assumed the office of Minnesota’s 8th District congressman. Every picture its paired with of the January 6th attempted overthrow of our government by Donald Trump is testament to the decline of the Party of Lincoln. I am badly needed as an antidote to the poison. As my campaign letter on the other side says. “I like democrats.” Republicans today try to defeat each other by hating our fellow Democratic citizens more than other Republicans. It must be the kind of Christians they are who have substituted hate with the New Testament.

I have my lawnsigns on order and if I didn’t wait to long to put it in they too will begin popping up in Duluth in time for the Grandma’s marathon crowd. I expect them to turn heads.

While the oath of office is devastating my letter isn’t bad either. If it doesn’t raise enough money for me to mail it to most 0f the district that will be probably be the effective end of my campaign.

If you think a Benedict Arnold deserves a tough race consider helping me now before I send you the letter.