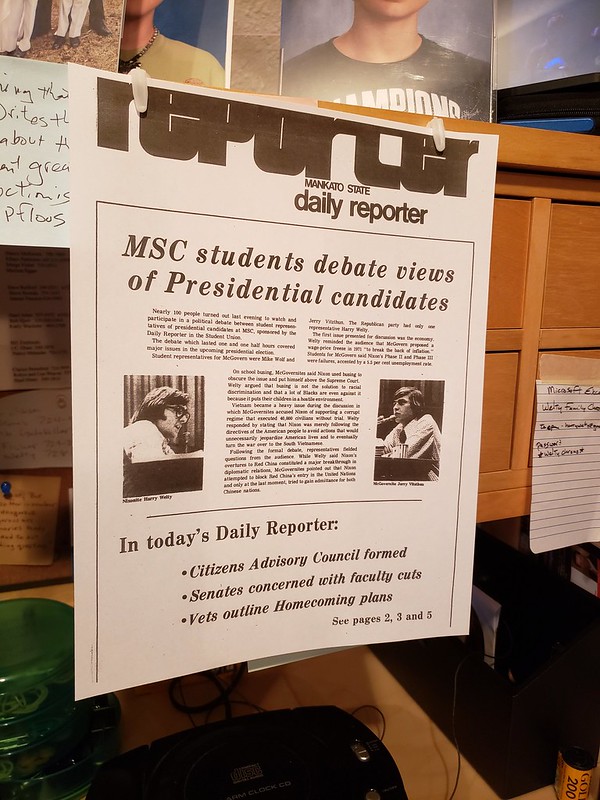 I found this a few years back when I wondered if old issues of the Reporter, Mankato State’s Student Newspaper, could be found online. They can be found and I printed out the page that showed the two debaters in the Nixon McGovern debate back in the Fall of 1972. I was the “Nixonite.”

I made a second copy yesterday and affixed it temporarily near my computer thinking I ought to comment on the Press today. Then yesterday I spent a morning looking through three years of my high school newspaper which I apparently kept every issue of. Ah, the memories!!!!!!

I’ve spent much of my life accumulating papers, writing them and then attempting to keep some track of them so that I can find them when they demand my attention. The last month I’ve been operating on overdrive to clean them up as I want them off my mind as I contemplate doing something next year that I have yet to talk over with my long suffering wife. Her suffering may continue.

I have an afternoon’s work completing the paper filing for the 1990’s which will leave the recent two decades which barely counts as history if you ignore the 9/11 attacks and the attempted overthrow of our Government by President Un-elect Donald Trump at the other end of the last twenty years. It has been a time for the shrinkage of newspapers and the explosion of data, not to be confused with useful information as the tidal wave of news includes crackpottery like Fox News’s talking heads.

Surely when I turn my attention to this I can find something to say about journalism for next week’s Reader Column. I’ve got to say that reviewing 50 years worth of paper has left me with plenty to write about. But I keep nibbling away at my organizational time. Writing in the blog interferes. A looming snowstorm will likely divert me as I ponder some new sculpture. And I’ve got two days of Substitute teaching next week. In fact, I have two days a week scheduled through the end of the school year and that only counts one school. Another school has signed me up as well and I might even make myself available for ISD 709 although I’m now in a one car family which makes my travels a little more complicated.

I also intend to finish writing that book I’ve long threatened to write soon after I get the 1990’s files sorted. I have the debris of four or five of them in three-ring-binders by my feet under my computer desk. They are my next organizational target. I’ve always thought I had a book in me and I’m overdue writing a second one. (Here’s my first) Which book will be first out of the stable? I don’t know. I don’t know.