I have spent the better part of the last month in overdrive organizing 50 years worth of family and personal documents. It has been enlightening, chastening and sometimes amusing. I include this letter in the later category and it certainly fits the heading of this post.

In 1990 I agreed to be a Sunday School teacher at Glen Avon Presbyterian Church. There was no curriculum and I chose to write two and three page discourses to the students for later discussion. After a while I sent out postcards inquiring if the students wanted them continued. Mostly the answer was “NO” but as you can see from the returned postcard below I got a couple of OKay’s for more such letters. When I asked our assistant pastor if he thought it was questionable for a “non member/agnostic” to teach our Sunday School I got a “Yes” to my question. It was just as well. Being in the Choir made it hard to get to the class on time.

I only reread this letter this morning 30 years after having sent it. I haven’t read the eight discourses yet. I’m in no rush. I still have a lot of other stuff to review and refile. But I was pleased to see how dedicated I was to an honest description of my credentials for teaching sunday school.

By-the-way, a couple days ago I reread the letter from my own high school Sunday School Teacher, Glen Taylor, from Mankato. He was responding to a letter I wrote in in the 1990’s encouraging him to run for Governor as a Republican candidate. He never did. He was a State Senator at the time but most people know him as the owner of the Minnesota Timberwolves and as one of Minnesota’s richest men. 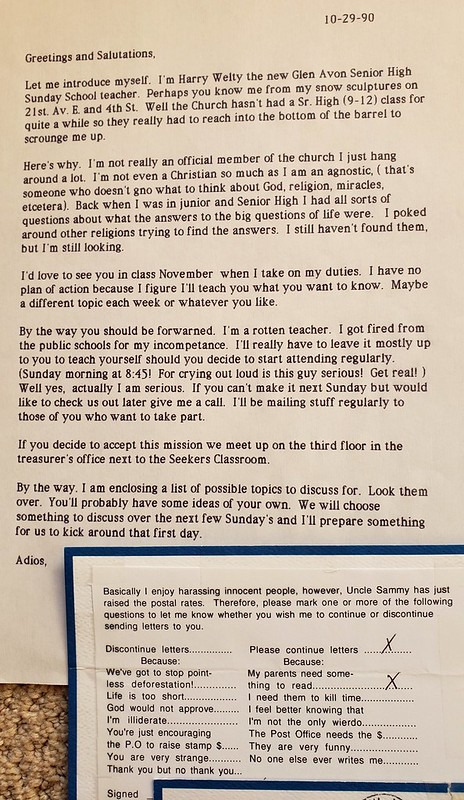